Vote Votto: Stick It to MLB

Working for a company that offers, among other things, email marketing software, I have above-average knowledge of and strong opinions about what good email marketing is. The number one rule is relevance. Even your crappiest email service provider can provide you with basic tools to send a personalized (read: team-specific) message to your subscriber, and not doing so is a message to your reader that you don’t give a shit about them beyond the cash you can suck our of their wallet.

Case in point, I received this email from MLB yesterday: 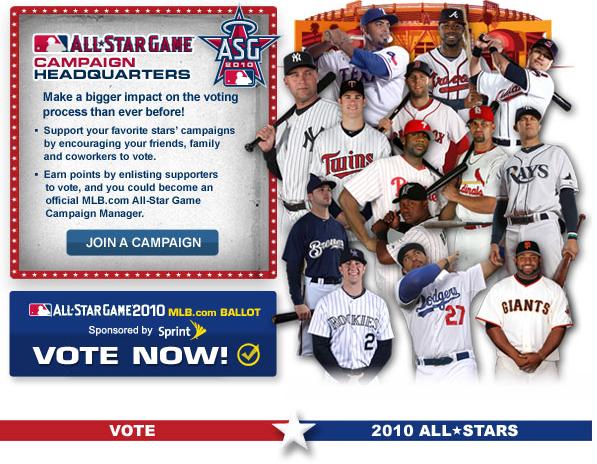 I’ll refrain from my soapbox speech about how MLB’s monopoly has made it a deformed, twisted freak of a business that would never survive in a free market, and instead get to the point about this email. I’m enraged at MLB for picking favorites in this contest where they should be impartial. I’m enraged that none of the guys getting this free promotion is from my team. I’m enraged to have this one-size-fits-all piece of spam crapped out into my inbox.

And I’m also terrified that if I don’t use this POS tool, I won’t be able to counteract the fact that other people will. MLB is counting on the fact that weak-minded are easily encouraged to support Albert-frigging-Pujols.

But my righteous indignation need not go unsatisfied! We can stick it to MLB and their amateurish marketing techniques by showing them that All-Star means who WE want voted in, not who THEY want voted in.

I am willing to Vote Votto for you. Send me a message from your email address to give me permission to vote on your behalf, and let me know if you want the Votto-only ballot or the all-Reds package deal. I promise not to send you any unsolicited email–I can’t promise MLB won’t though.

The Daily Brief: Finally Taking Advantage of the Cardinals Losing

Last Game
The St. Louis Cardinals have been unable to defeat the Los Angeles Dodgers all week, but the Cincinnati Reds had been unable to win even one game to get out of the tie for first place. Until last night.

Aaron Harang pitched his best game of the year, which is nice to see, allowing 2 runs over 7 innings. That was enough for his 5th win, getting him back to .500 on the season. The offense got to an early lead thanks to great nights from Orlando Cabrera and Scott Rolen. And in a surprising twist, the bullpen didn’t blow the lead. The Cardinals lost again, so now the Reds are back in sole possession of first place.

Next Game
The Reds look to Mike Leake to tie the 4-game series against the Giants. San Francisco counters with Todd Wellemeyer. Game-time is 12:35pm EDT.

Rehab Roundup Time
There are several Reds pitchers working their way back from injuries.

Homer Bailey made a rehab start for the Louisville Bats the other day, and despite his displeasure with not being activated to the big club, didn’t pitch like he was ready to return. At least, he did nothing to displace Sam LeCure from the Reds rotation. Bailey allowed 5 runs over 4 1/3 innings.

Edinson Volquez, coming off Tommy John surgery in August 2009, will make a rehab start for Single-A Lynchburg. His suspension does not prevent him from rehabbing.

In reliever news, Jared Burton has been struggling as he builds up arm strength and gets back in the swing of things for Louisville. Over his last 3 outings with the Bats, he’s allowed 5 runs on 4 innings pitched. It would be nice if he became effective and forced the Reds hand with Nick Masset.

Also, did you know the Reds still had one player left over from The Trade? I didn’t, but apparently Bill Bray plods along in the system. He’s rehabbing from a Tommy John surgery in Single-A, as well. I wonder if Cincinnati continues to invest in him because they think he has value or because they’re still attempting to save face.

What to Say to Sound Smart at the Water Cooler
Heading into last night’s game, the Reds were hitting .293 with runners in scoring position. That’s second in the majors to Arizona. Last season, the Reds hit .251.