It’s the baseball post season, and you know what that means: time for over-the-top avocado commercials! I’m not sure when the post season became synonymous with the fruit, but it’s full of heart-healthy omega-3s and mono-unsaturated fat or something like that, and this is the time when I start getting emails from the avocado council.

Not to bow under the pressure from Big Avocado, but I do like my share of guacamole, and I thought I’d put up a whimsical post today with my guac recipe.

Optional ingredients, if they happen to be around the house and you like them. Actually, most of my recipes are decided based on what I find in the fridge, which can get very interesting when we’ve forgotten to customize the produce delivery order.
1 small tomato, diced
1 tsp lime juice
1/4 tsp cayenne pepper 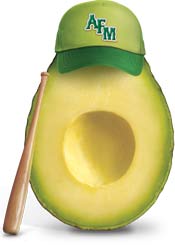 1. A ripe avocado is soft like a peach. Not mushy. If you’re buying a mushy avocado, you’re going to end up with a bowl of brown goo instead of guacamole. There’s no excuse to buy an overripe avocado. You’re better off to buy them underripe, because they’ll ripen in a matter of hours if you put them in a paper bag with an apple.

2. Oh, yeah, you want to cut the avocado. I prefer to cut it halves and then in quarters because it makes it easy to get the flesh off the peel. Some people seem to take a great deal of pride in dicing their avocado before mashing it, which doesn’t make a ton of sense to me, but hey, whatever floats your boat. I guess you might want to dice if you want chunky guac. Personally, I take mine like I take my men: smooth.

3. That’s great in theory, but utterly untrue in practice. The part about the men, that is; the guacamole really is quite smooth.

4. So, once you’ve mashed up your avocado, diced or undiced, and acquired a man of your desired smoothness, in a medium-sized bowl, I recommend adding the salt, cumin, and cayenne. Putting the spices in after all the chunky stuff threatens to make it uneven. For me, I put a light sprinkling of salt over the surface of the avocado, but I know some people like to really get their blood pressure going with the guac. Just keep in mind that you usually serve guac with chips, which also contribute salt to the taste. Stir it all up.

5. Now, if you’re like me, this is the point when you do all the mincing and dicing, even though it clearly said in the ingredient list that the stuff should be minced or diced to begin with. My middle school cooking teacher would be shaking her head in disgust, because that’s the sort of stupid shit she got all worked up over.

6. Dump the other stuff in there and stir it up. The flavors do tend to meld together over time, so making it a couple hours or even a day ahead can be a good call. Just make sure you lay plastic wrap right on the surface of the guacamole before putting it in the fridge to keep air from getting at it. Otherwise, you’ll have a big bowl of brown goo regardless of the ripeness status of the avocado you used.

Serves about 4, so long as you also have other snack foods around. Next time, if you’re lucky, I’ll share my recipe for pizza rolls. (Step 1: open the box)

Posted in Random Ramblings.
Comments Off on Post Season Guacamole