Last Game
The Reds didn’t really intend to make sure the Pirates had a losing record for the year, but that’s what happened yesterday when the Reds beat them 4-3. It was a tall order for the Pirates anyway, who needed to win-out starting on Saturday just to finish .500. It’s tough to make that transition to winning team when it’s been so long. They’ll do better next year.

Johnny Cueto was going for his 20th win of the season, but fell just short as the Reds didn’t take the lead until Sean Marshall’s watch. Still, 19 wins ain’t bad, and saving one for the postseason isn’t something I’m going to complain about. 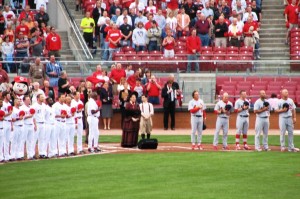 Next Game
The Reds head to St. Louis for the last regular-season series of 2012. The Cardinals are still in active pursuit of their postseason berth, currently holding a 2-game lead for the second wildcard over the Dodgers. Amazing to think that if there were only one wildcard slot this year, the Cardinals would have already booked their flights home.

It’s a lot to ask of the Reds to sweep the Cardinals or even take the series. These two teams are at opposite ends of the motivation spectrum: one team having knotted up the division days ago and the other still fighting for its life. But if any team can get the Reds fired up in an otherwise meaningless series, it’s the Cardinals. Bronson Arroyo (RHP, 12-9, 3.70 ERA) will be taking his turn against Jaime Garcia (LHP, 6-7, 3.99 ERA). First pitch at 8:15 p.m.

The Return of Baker
Today is the big day: Dusty Baker finally returns to active managing of the Cincinnati Reds.

He’s missed the last 11 games after going to the hospital before a game in Chicago to be tested for pneumonia, discovering he had an irregular heartbeat, and then suffering a mini-stroke just as he was about to leave the hospital.

The stroke word is a pretty scary one, but apparently it’s not unexpected among people with Baker’s irregular heartbeat condition, so they knew to be on the lookout for it and got it treated right away. Fortunately he was still in the hospital, so they didn’t even have to wait for an ambulance.

The other thing that’s typical with this condition is water retention, which is apparently something they remedied during Baker’s hospital stay. I haven’t seen a single picture leak out yet, so I’ll have to be on the lookout during the actual game tomorrow to see the newly trimmed down manager.

What to Say to Sound Smart at the Water Cooler
None of the divisions in the American League has yet been clinched. In the West, Texas holds a 2.0 game lead over Oakland. In the Central, Detroit leads Chicago by 3.0. And in the East, the Yankees and Orioles are still in a dead tie.

Posted in Daily Briefs.
Comments Off on Cardinals, Reds, and Baker: the final 3 games