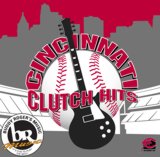 Cincinnati Clutch Hits is a collection of musical tributes to baseball in general and the Reds specifically by Cincinnati-area musical artists as well as nationally known names. Clutch Hits runs the gamut of musical stylings which often defy description, but the variety does provide a little something for everyone.

Marty Brennaman starts the album by introducing each performer or group as if they were in a defensive line-up. It's cutsie and something you'll probably skip over after the first dozen listens or so. My favorite part is that he has Raquel Aurilia coming out of the bullpen. Maybe the Reds should consider it.

And Andy performs Wire to Wire, an upbeat little number about a guy finding his dream girl on the Reds' jumbo-tron. It makes use of tons of references to Reds' pop culture that you're sure to appreciate.

Freekbass contributes Reds Fan. From the website, it looks like Freekbass would be called funk, but we're well outside of my realm of musical experience with this piece. I liked it well enough. Crack technical staff can't stand it.

Under the Lights is a guitar-led country-style ballad by Noah Hunt about becoming a Reds' fan. The experience of a four-year-old spending time with his father at the stadium is a story many fans will identify with.

Screaming Mimes, with their college band name, had me thinking I'd be hearing some harsh, ranty tunes, but I couldn't have been more off-base. Think Barenaked Ladies meets an entire history of the Reds organization from 1869 for Three Cheers, Cincinnati. They reprise their cheerful sound later in the album with The Big Show. In both cases, these are the most likely songs to be stuck in my head for hours after listening.

Score by Jen Hillard has an innocent-sounding beat that belies the incredibly suggestive lyrics. Seriously, enough to make the Red Hot Mama blush. (“It might be a sin, but I keep thinking about first base with him.”) You've got to have an appreciation for a song that can do that.

Blessid Union of Souls provides Play Ball and Me, Marty, Joe, Ted & Louise, a couple tunes you'll probably recognize. I believe they were released on a previous album, but I was unable to maneuver their web site to confirm that. In any event, they're solid tracks.

Heart of a Hero is an original piece by one of our favorites here at RHM, Raquel Aurilia. It took me a few days to figure out what this song was reminiscent of. It's kind of dark and severe. In fact, it was the Crack Technical Staff that finally came through with the info: The Stroke by Billy Squier. Message of this song is much different, of course.

Ryan Adcock, in The Cul-de-sac League, gives a startlingly acute trip down memory lane with his description of playing baseball in the street as a kid. When he mentions the ghost man on third, you just want to double-over with the poignantness of it all.

psychodots give us Gimmetheball, a song that repeats its own title several dozen times with some very interesting progressions. I'm a little concerned about what it says about my mental state that I like this song so well.

Hall of Fame by Greg Mahan is entirely over my head. It seems to tell a story of a pitcher, but I must not be solid enough in my baseball knowledge to get it. Still, it's got interesting and unusual rhythms and a cool overall sound.

Chalkie features Blessid Union on the song Lost in the Lights, perhaps the only slapstick song I'm familiar with. It's a light rockish piece about an outfielder getting an easy fly ball that will win his team the World Series, but losing it in the lights. It's OK, though, because after he falls down, the ball lands between his legs for an out. That one, if it actually happened, would be sure to appear on Sportscenter for all of eternity.

Kinsey Rose gives us Daddy's Glove, a sentimental acoustic tune about realizing what's important in life while looking at her father's old baseball glove. Super-sweet bordering on schmaltzy: this song will be your mother's absolute favorite. You should buy her the album just for this track.

Peter Frampton wraps up the album with his talkbox rendition of Take Me Out to the Ball Game. I just don't like the song. I've never liked the talkbox effect, he messes up the lyrics a couple times, and he doesn't say “Redlegs” instead of “home team.” Sorry, Mr. Frampton. I give you full props for being involved with the project, though, and for lending the power of your name to the album.

Reds Community Fund Concert June 15
Don't forget that two of the artists featured on Clutch Hits will be performing live and in person this Thursday, June 15 at the Madison Theatre in Covington.