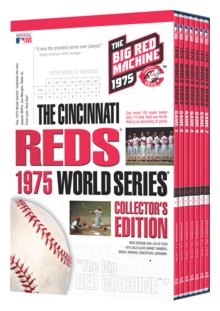 A&E and Major League Baseball has put together a seven-DVD collector's edition of the 1975 Big Red Machine World Series. I won't have time to review the set until this weekend, but just looking at the box, you can tell this is a beaut. Click the “More” link below to read all about this DVD set.

I am also pleased to announce that I have three promotional copies to give away for absolutely free. That's no small prize, my friend. The very, very cheapest you're going to get this thing for is $41, and that's before shipping.

UPDATED 9:22 p.m. to correctly distinguish between an official press release and a non-team-approved story.

According to an official press release on Reds.com, General Manager Wayne Krivsky has traded with the Minnesota Twins to acquire Juan Castro for minor league outfielder Brandon Roberts.

That's right, Juan Castro. The damn-near 34-year old that you remember from the early aughts. The middle infielder “defensive specialist” who can't get on base. The “veteran prescence.” The “Womack Jr.”

Mark Sheldon, MLB writer for Reds.com says in his related story: “One potential red flag is his inability to get on base consistently -- he has a .258 on-base percentage this season…”

So the question is, what are we seeing here? Is Krivsky getting sick of the errors and willing to trade everything Lopez offers for a consistent throw to first? Is he playing out his role as double-agent for the Twins? Or is he pulling off one of those doesn't-make-any-sense-until-it-works moves that he did so well a while back?

Guess we'll find out tomorrow. Paul Wilson has been moved to the 60-day DL to make room on the 40-man and a corresponding 25-man move (sending down Olmedo, I reckon, dammit) will be announced in time for Castro to take the field against the White Sox.

The clouds parted and a chorus of angels sang as Adam Dunn hit a three-run home run in the home eleventh to break a 0-0 tie with the Milwaukee Brewers and put an end to a five-game losing streak.

Elizardo Ramirez led the charge with an amazing eight innings of shutout baseball. He gave up five hits and one walk against 10 strike outs. Lately, it has taken near pitching perfection to give the Cincinnati club a chance at victory as the offense has failed time and time again to get runners on base. Thankfully, the Lizard was able to acheive near perfection.

Also thankfully, the bullpen did not allow any runs for a change. Todd Coffey took over in the ninth and tenth, giving up zero runs on one hit and one walk. Chris Hammond held the Brewers hitless in the eleventh for the win.

Not much to say about scoring. Dunn had all of the team's RBI with the 3-run dinger. Ryan Freel, Felipe Lopez, Ken Griffey, Jr., Rich Aurilia, and Scott Hatteberg also had hits. Hatteberg went 1-for-1 with three walks. Hattey's been hitting well, but I really don't know if he deserved that.

The win brings the Reds' record to 37-29. They take Thursday off before hosting a set of three with the White Sox. Brandon Claussen takes the mound against Freddy Garcia. May the angels be watching.