John Fay Has a Blog

I guess we'll have to stop talking about him now, because John Fay has joined the party.

John Fay has been the Reds beat writer for the Enquirer since 2001. Prior to that, he served in the variety of roles for the Enquirer: backup Reds writer, UC beat writer, backup Bengals writer and as a general assignment reporter. He is a Cincinnati native and a graduate Elder High School and the University of Dayton.

Check it out; you'll probably like it. I saw several paragraphs with more than one sentence, so I approve already.

Dunn is on The Program

Dunn looks noticeably leaner, he said he's done more running and eating much better. New hitting coach Brook Jacoby visited him for about a month ago in Houston.

“Iâ€™m trying to get that out of my head, first of all,” Dunn said. “I spent all offseason thinking about how hard the last two months of the season were for me; I was terrible. I donâ€™t want that to happen to me again.”

There are plenty of Dunn fans out there who don't care that he walks to his position because he contributes 40 homers and .850 OPS. There are just as many Dunn fans disappointed because he does that stuff without seeming to really try, and just think what he could do if he'd apply himself.

I don't know about those people, but I get pretty excited to think that he's on the path to really apply himself this season. The guy's a freakin' tank. Plus, the photos of him are going to look that much better.

Majewski Not All Better 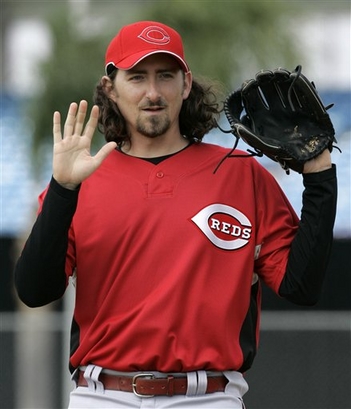 Trent tells us that Gary Majewski is still hurting:

The Reds reliever isn't ready to go 100 percent yet, still suffering from the inflammation of the right shoulder that bothered him since coming over from the Nationals last season.

OK, it's not his fault; it really isn't. But dang it all, it's just sickening. The Trade was painful enough without being constantly reminded that we got damaged goods in return.

Posted in Random Ramblings.
Comments Off on Majewski Not All Better

The Pittsburgh Lumber Co has been doing a comparison of NLC teams on a position-by-position basis. Since I've been feeling contrary, I've been doing my own responses to these comparisons. This time we're talking about second base. You can also read what I had to say about the catcher and first base.

This is where it gets tough, I think. I canâ€™t say that any one of these guys is a better defender than the group (although Biggio and DeRosa are towards the bottom of the list). Castillo is more of a risk/reward type than the others; I think Phillips, Kennedy and Weeks are more dependable than Jose, but that the Pirate has the highest ceiling in the field. Still, Iâ€™m basically disregarding defense in this ranking, as thereâ€™s not a significant separation.

The question remains: How do I sort these players? Itâ€™s nearly impossible to glance at the statistics and weigh the importance of power against steals, batting average against slugging. Theyâ€™re all built in different molds. Craig Biggio isnâ€™t the best second baseman just because heâ€™s projected to hit 18 bombs.

For catchers and first baseman, there was a somewhat clear order to the players. Here, though, Iâ€™ll rely on a definite metric for the rankings. On-base percentage plus slugging percentage is a stat that should cover everything I find to be pertinent on offense. Looking at OPS, I get Rickie Weeks at the top, then a group of Biggio, DeRosa and Phillips, then Kennedy and Castillo. The players are separated by only thousandths of a percentage point, so subjectivity is again forced into play.

Weeks is the top dog, heâ€™ll get the 10. Out of the next triumvirate, I like Phillips the bestâ€“I think he has the most upside, and should play the best defense. Heâ€™ll run, too, providing a skill that the other two donâ€™t. Mark Lorettaâ€™s presence in Houston knocks Biggio down a peg, as itâ€™s unlikely that Craig will get more than his projected 440 at bats. Out of the last two, Iâ€™ll take Castillo over Kennedy. Jose has the potential to play Gold Glove-caliber defense and hit for power, while Adamâ€™s ZiPS numbers are seemingly his ceiling.

The separation is minimal, so the subtractions from player to player are small.

The sentence “he'll get the 10” tells me that again, I've misunderstood how this comparison is being done. I was under the impression that you'd be able to add up the scores for each team to project who would be the best in 2007, but if someone at every position will receive a 10, that's certainly not the case. Definitely Rickie Weeks wouldn't be contributing the same number of points to the Brewers' total as Albert Pujols is adding to that of the Cardinals.

You think a comparison like this is going to be easy, until you actually sit down and dig into the details.

In any event, it's hard to complain about Phillips coming in second with a score of 8, though personally I'd give him bonus points for an excellent attitude. Where is the Spunkiness category, anyway?

Posted in Random Ramblings.
Comments Off on Divisional Comparison Continues: Second Base