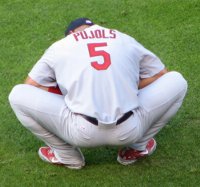 Maybe the difficulty that the Cardinals and Albert Pujols appear to be having coming to an agreement on a contract extension for the brute is a strange topic for RHM. After all, we’ve focused pretty exclusively on the Reds lately, and the Reds are one of the few teams that would not be trading up to take on the gorilla-sized first baseman.

Even so, I find it fascinating, with the clock ticking down, that we aren’t hearing anything. Apparently, prince Albert has set a deadline of the day when position players report to spring training, February 18 in the Cardinals’ case, for the extension of his contract. As soon as he hits the practice field, he’s no longer willing to talk dollars. And if his people and their people cannot come to an agreement, the galoot will be a free agent come the end of the 2011 season. And, lest you think that the Cards are holding out to trade him, he’s a 10/5 player and can veto any trade.

Of course, there’s nothing saying that they haven’t long since come to an agreement and are just keeping it quiet (and doing an unusually exceptional job of it) to increase interest. Or that the Cards might be banking on a less-than-stellar year so they can pick Pujols back up on the cheap from the free agent market. (That one seems pretty unlikely, but I’m talking nonzero chance here.) But rumor has it that Pujols is talking 10-years, $300 million from his side of the table. The price per year is probably about right, but the Cards seem to want to stay in the 7-8 year range. Understandably. In ten years, Pujols will be “41.”

If I had that kind of money, I’d hire a full-time fashion designer to make all my clothes. I wonder if Pujols has ever considered that. But I digress.

Fan sentiment seems to be mixed. On the one hand, people love them some Albert, but on the other hand, they’re thinking about what else they might be able to buy with that kind of money. Looking back on all the years when the team has failed to win it all (or even make the postseason in some recent cases) with Albert on board has to tip the sentiment in favor of spreading around the cash a little.

And the secrecy of the whole even can’t be helping either. I understand not wanting to make a big production, but come the beginning of February, fans are starved for baseball action, and huge dollars and a deadline ultimatum are just the kind of drama we feed on. The ultimatum itself could make matters worse. Albert says he wants to focus on the season and put the contract out of his mind as soon as he takes the field, but no one else is going to be able to put it out of their minds so easily. If he’s a pending free agent, every darn person out there is going to be watching to see who might be starting the courting process early.

The good news is that it isn’t going to be the Reds. Cincinnati won’t have to make the decision between funding the first baseman or paying the rest of the team for another three whole years.