Boy, that was ugly. Still, after the long winter, any baseball is better than no baseball.

In a game that means nothing and from which nothing but silliness can be extrapolated, the Reds offense was shutout and the pitchers were rocked. Arroyo went 2 innings, retiring 6 of his 7 batters, but allowing one run on a home run. Then came the parade of relievers. Francisco Cordero gave up a run during his inning of work. Perhaps more troubling than the run is that he walked a batter. He did that far too much last year, and I hope he’s cut down on that by the start of the season. Dontrelle Willis, Nick Massett, Aroldis Chapman, Bill Bray, and a couple pitchers from minor league camp rounded out the rest. Bray was the only pitcher among them all to throw a 1-2-3 inning.

As for the offense, the Reds had none. Well, they had 8 hits, but never managed to string them together in a productive fashion. Oh, and the defense committed 5 errors. Yeah, it was ugly out there. But it was still fun to listen to.

How Many Cameras Does it Take to Capture the Awesomeness of Joey Votto? 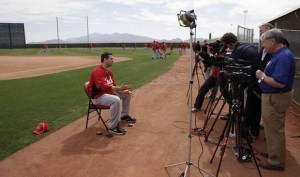 Votto sits in the confessional for the as-yet-unannounced Reds reality show.

Posted in Cincinnati Reds, Human League, Joey Votto, NL Central, Pretend Captions, Spring Training.
Comments Off on How Many Cameras Does it Take to Capture the Awesomeness of Joey Votto?

The Daily Brief: The Inaugural 2011 Brief

Last Game
Baseball’s back, and so is the brief! In the Spring Training opener against the Cleveland Indians, the Cincinnati Reds won in their traditional 2010 fashion, engineering a comeback in their last at-bat. You can relive it via my live-blogging here. Corky Miller, the mustachioed wonder, drove in the winning run to give the win to Darryl Thompson. Jose Arredondo pitched the 9th for the save. Matt Maloney, who started in place of Edinson Volquez because of his Visa issues, acquitted himself very well, going two innings, striking out two, walking none, and allowing no runs.

Next Game
Game 2 is this afternoon between the same two teams. Bronson Arroyo goes against Fausto Carmona at 3:05pm EST. The game will be broadcast on 700 WLW.

Reds Reporter Mark Sheldon’s Guide to Goodyear
If you’re planning on heading out to Goodyear to catch some Spring Training games this year, it’s helpful to have an idea of things to do, sights to see, and places to eat. Mark Sheldon prepared a good one.

Phoenix Zoo — I’ve taken my family here and we were very impressed. The animals are perky and actually do more than lay around.

Westgate — Glendale: It’s like Newport on the Levee, times 100. Lots of restaurants and bars.

Sedona — two hours away but worth the drive and bring a camera. The mountain peak views and red rocks are simply spectacular.

Raul and Theresa’s — One of the best Mexican restaurants I’ve ever been to and it’s not a chain, yet. It’s only 10 minutes from Goodyear Ballpark

Yogurtland, Avondale and Scottsdale — Great dessert spot with about 15-20 different yogurt flavors. It’s all self-serve and there’s around 30 toppings to choose from.

The Red Hot Family had the chance to do many of these things last year. The Newport on the Levee type place is nice with lots of variety, from stores, to restaurants, to large, courtyards. We didn’t like Raul and Theresa’s as much as the reporters seem to have, but it’s a solid Mexican place. The In-N-Out Burger we stopped at was as popular as advertised. The Crack Technical staff recommends consulting the “Secret Menu” first.

Someday, we’ll schedule a long enough trip to make it to Sedona and do some mountain hiking. It may not be until the Red Hot child is out of school, though. His spring break never coincides with spring training, and the schools do frown on pulling your kid out of school for the week during standardized testing.

What to Say to Sound Smart at the Water Cooler
The Reds have both the reigning National League MVP award winner in Joey Votto and the World Series MVP in Edgar Renteria on their 25-man roster.