Less than 100 Spots Remain at the Jay Bruce Baseball Camp

CINCINNATI, OHIO – There are less than 100 spots still available for the second annual CBTS and Fifth Third Bank in partnership with the Cincinnati Reds Hall of Fame and Museum. The Cincinnati Reds Star Outfielder will host his annual camp July 25-26 at Prasco Park in Mason, Ohio from 8:30 a.m. – 12:30 p.m.

Jay will be on site the entire camp to direct activities and provide instruction. The camp will be directed by Indiana University Head Baseball Coach Tracy Smith. He will be joined by several of the top prep and collegiate coaches from the Cincinnati area. Camp is open to boys and girls ages 6 to 14.

Posted in Press Releases.
Comments Off on Less than 100 Spots Remain at the Jay Bruce Baseball Camp

FOX Sports picked up the Reds game yesterday. Yay! Wait, the blue is where they showed it: 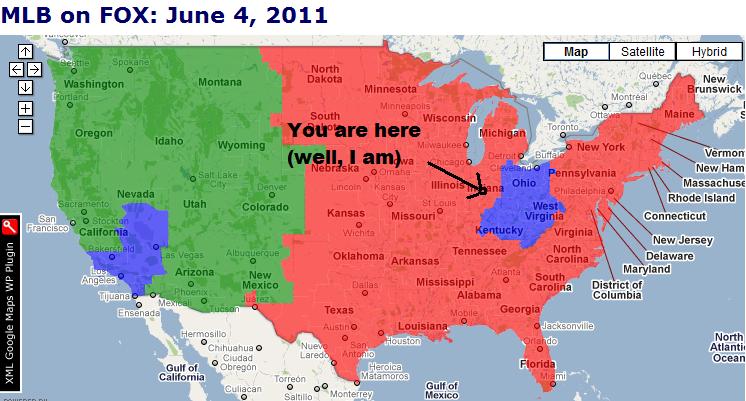 I might point out that the coverage would have been better if they’d just left it on FSOH, but thousands of Reds fans who didn’t get to see the game last night already know that.

Posted in Random Ramblings.
Comments Off on Why FOX? Why?

The Cincinnati Reds seem to have at least one game like yesterday’s every year. They had a 7-2 lead heading into the 8th, and the bullpen had a spectacular implosion that resulted in a painful loss. Many teams have done this to the Reds, including the Milwaukee Brewers and the St. Louis Cardinals. And now add the Los Angeles Dodgers to that list.

Everything was going great for the majority of the game. Johnny Cueto started and followed up his complete game effort last start with 7 strong innings of 2-run baseball. The offense provided more than enough runs by scoring 7, including a 3-run home run from Joey Votto.

The game eventually headed into extra innings, but the Reds were already done. The 8th inning killed them again. Carlos Fisher ended up getting the loss by allowing 4 runs in the 11th, but you could make a good case that any of those pitchers from the 8th was deserving.

The series with the Dodgers is even now, and despite the painful loss, the Reds still have a chance of taking the series today, assuming they can bounce back.