Where is the Reds’ power?

Ten games into the season, and our Cincinnati Reds are 4-6. Sure, it’s probably a touch early to be going into full-on freak-out mode, but all the condescending “calm down, it’s early” comments somehow have failed to make me revel in the 65 wins we’re currently on pace for. 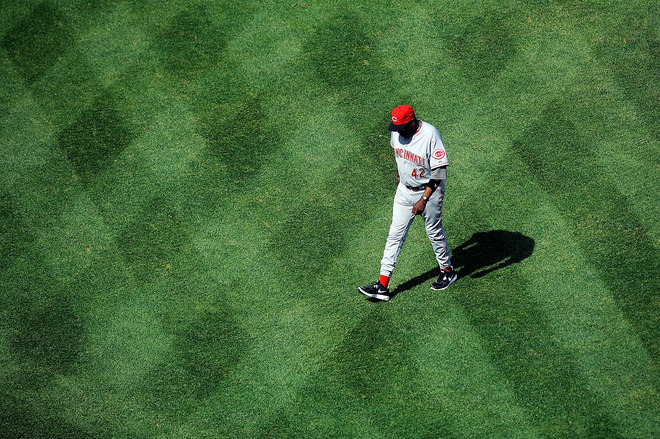 Though frankly, it’s not the losses that get me–the Cardinals looked crappier than this to start out last year, and look where they ended up–it’s this unshakable sense of deja vu.

“We’re going to hit our way out of this slump, not walk out of it,” said Dusty Baker. Well, there’s a familiarly obtuse comment for a familiarly frustrating situation.

Let’s take a stroll down memory lane to 2011. After a mesmerizing start, the Reds repeatedly found themselves on the short end of the scoreboard. It wasn’t exactly that they weren’t getting the hits. It wasn’t even that they weren’t getting the runs: they scored 735 and allowed only 720. It was just that those hits and run were somehow coming at the wrong times. It was like the whole team came down with a case of Adam Dunn-itis (meaning that they didn’t come through when the team really needed it, not that they were hitting .159 for the year).

It’s baffling because it seems like the team should have all of the pieces. Joey Votto, Jay Bruce, Brandon Phillips–hell, even Zack Cozart and Ryan Ludwick–these guys don’t suck. Why does it take Bronson Arroyo knocking in his own runs to get the team on the board?

Strategic walks are certainly a part of it. Votto has been walked (intentionally or otherwise) 10 times in his first 45 plate appearances. Assuming 700 plate appearances, that puts him on pace for 155 this year. That would put him in the top 10 most walked players for a single season.

And given that strategic walks are playing into it, that means that strategic line-up construction is important, too. Again, yes it’s early, but Scott Rolen has all of four hits so far this year. I’m just spitballing here, but perhaps he is not the best protection in the cleanup spot, at least until he’s found his stride, for example.

At the Red Hot Household, the conversation keeps coming back around to the same theme: there are no obvious deficiencies here. It’s not a perfect team, but less perfect teams have gone further. All the raw materials are available, and now they just need to be put together right.

Hopefully the avoidance of walks is enough to do the job.