How hitting Votto was a team-building event

In last night’s titanic struggle between the Cincinnati Reds and the San Francisco Giants, a hapless Dan Otero in relief for the Giants missed his release point and hit Joey Votto smack in the thigh. No big deal; he wasn’t trying to do it. He was probably just so desperate to miss the Votto wheelhouse that he went a little overboard.

But the interactions that followed that event were, to me, much more interesting than the game itself. You see, this kind of interaction is part of “guy speak.” 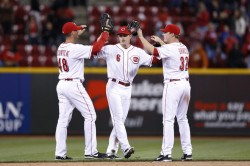 When I say “guy speak,” I’m not just talking about words, but all those interactions between guys that are a natural part of the sociology of being in the pack. I’m not talking about interactions among responsible adult men, with stock portfolio and prostate concerns. I’m talking about those things that make innate sense to guys but are utterly mystifying to women–wrestling past the age of 10, “pre-gaming” before a night at the clubs, and being willing to go into a bar’s single-person restroom to pee in the sink if total strangers are already using the stall and the urinal.

I am amazed by this stuff (except for the peeing in the sink one, which just grosses me out), probably because I can’t be a part of it. As soon as a woman is involved in any of these scenarios, they change: sort of a Heisenberg’s guy speak uncertainly principle. (Except that Heisenberg, being a guy, wouldn’t have invoked the uncertainty principle himself, unless there’s some sort of exception for physicists.)

So, while it’s probably mundane and instinctively understood by dudes, to me the hitting of Joey Votto was a social event worthy of further consideration. This is what I saw.

After an unsuccessful attempt to get out of the way, Votto stood stock still for a moment, expression blank, even though that had to smart like hell. He started to turn around to take the base, but first picked up the ball and threw it back to the pitcher while maintaining slightly-longer-than-social, unsmiling eye contact. The whole thing lasted about five seconds.

“What does that mean?” I actually said out loud to no one in particular. The failure to react is probably just tough-guy stuff: there’s no actual injury there, so don’t let ’em see you sweat. Not so mysterious, I guess.

But the picking up the ball and throwing it back confounded me for a while. It wasn’t an aggressive throw; he wasn’t trying to hit the pitcher back. It was more like a wry, “Hey, you dropped this.” Surely he wasn’t just being helpful, at least, that’s not what the eye contact said. The eye contact said, “Since you’re new in town, I’m going to cut you a break today. So why don’t you make like a tree and get out of here.”

Then it was over. Votto takes first to load the bases. A shaken Otero walks Brandon Phillips to walk in a run, and the Big Inning proceeds.

But then it gets interesting again. In the top of the ninth inning, Sam LeCure exacted a retribution pitch, throwing behind Buster Posey. Not Sandoval, not the pitcher, but the corresponding character on the Giants’ team. If a guy punches you in the gut, you don’t punch him in the hand, you get him in the gut back. This action is a team acting as a whole.

I know that MLB tries to quash this sort of thing, and promptly warned both benches. Wouldn’t want the little kids and old ladies in the crowd to think it’s OK to stand up for your friends. But I think that to remove this stuff from the game is to rob baseball of the genuine, if somewhat primitive, team/pack dynamic.

Obviously, baseball doesn’t want to cultivate the Ron Artests of the world, but there is a happy medium between brute and physicist, and it is called “guy.” And watching that balance unfold is what makes the game so fascinating. 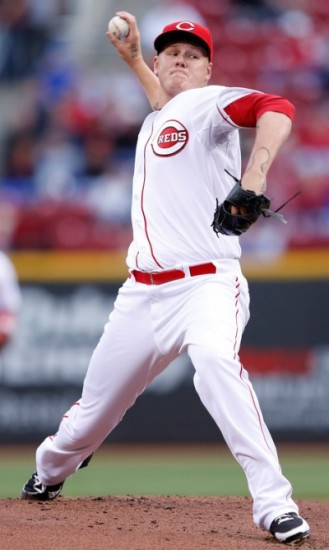