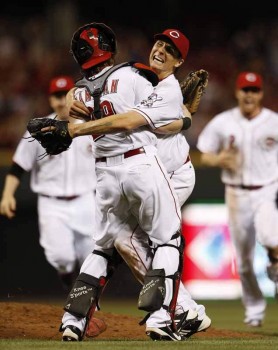 Homer Bailey and Ryan Hanigan celebrate after the recording of the last out of his second no-hitter.

In case you missed it last night, Homer Bailey threw the second no-hitter of his career.

This time, Bailey was slightly more effective, needing only 109 pitches–6 fewer than last year–to dispatch the Giants. In his 9 innings, he struck out 9, walked one, and allowed no hits and no runs.

Now that he has two no-hitters, Bailey joins some prestigious company. There are only 5 pitchers in Major League history with more than 2 no-hitters.

Bailey’s got some opportunity to join them. Until then, he’ll have to console himself with being the equal of guys such as Justin Verlander, Roy Halladay, and Randy Johnson. Tough company to keep.