The National League takes on the American League tonight in Citi Field, the home of the Mets. Despite the Mets being an NL team, each line-up includes a DH. I can’t remember why. Do they alternate years? I’m a bad fan for not knowing, but that doesn’t stop me from talking.

Here are the line-ups:
National League:

Pitching for the NL will be Matt Harvey (RHP of the Mets). It’s not very often that the All-Star Game starter is pitching at home (it hasn’t happened since 2004), but Harvey’s had a helluva year. He’s 7-2 with 2.35 ERA and 147 strike-outs in his first 19 starts.

I’m excited to see Joey Votto in such a prominent place in the line-up. Maybe this will finally be the year he gets an All-Star hit. He’s 0-for-7 in his prior 3 All-Star appearances. Same goes for Brandon Phillips. Leading off is a big deal. He’s 0-for-2 in his two previous All-Star games.

Whatever you want to say about these guys, the Reds have clearly contributed the best looking component of the roster. 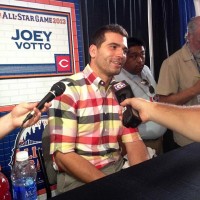 Votto can smile! It’s been a while since we’ve seen that. 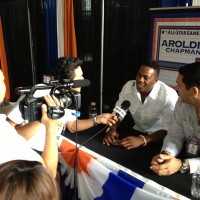 Aroldis Chapman will blow ’em away. 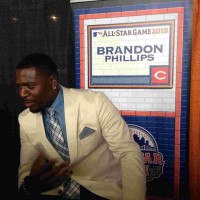 Pocket square and everything. Man, Phillips is all style.

Posted in Random Ramblings.
Comments Off on All-Star Game tonight!

Does winning the HR Derby raise your trade value?

This video is actually 2 years old, but it still pretty much sums up the experience of watching the Home Run Derby.

Kudos to you if you got through the whole minute and a half. I was annoyed after 15 seconds. Plus, I have this sudden craving for chicken…

For those of you who actually enjoyed your day off of baseball yesterday by doing non-baseball things, the Home Run Derby happened. In each corner of the Derby octagon you had: 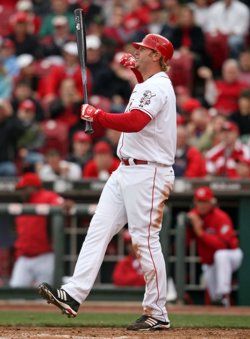 If they had a Walk Derby, no one would stand for Dunn being left out.

After round 1, we were down to Céspedes, Davis, Harper, and Cuddyer. After round 2, it was just Céspedes and Harper. I suppose I should have been rooting for Harper, seeing as I’m an NL fan, but I just can’t quite make myself get on board with someone with such an over-inflated ego. Maybe its my Midwestern sensibilities, or maybe it’s just my own over-inflated ego getting in the way. Either way, the A’s own Cuban immigrant put the hurt on young Harper in the last round, overtaking his home run total with still 5 outs to go.

Yet again this year, there was no Adam Dunn in the line-up. Dunn has more home runs so far this year than three of the four AL contenders (all but Chris Davis, who’s leading the majors with 37). He has more home runs already this year than Céspedes had all of last year. Dunn’s continued exclusion from the Home Run Derby is as unexplainable as Weird Al Yankovic never having been the musical guest on SNL. Someone in charge must not like their irreverent tone and curly hair.

Of course there weren’t any Reds, which doesn’t surprise anyone. There aren’t any home run hitters on the Reds, except for Jay Bruce. And Bruce would just hit 25 in round one only to get shut out in round two. Wouldn’t be much of a show.

Anyway, congratulations to Céspedes, and I wonder whether his win has raised his trade value. The Reds could use a left fielders with some power, and it doesn’t seem like anyone is acting on my idea to bring back Dunn.

Posted in Random Ramblings.
Comments Off on Does winning the HR Derby raise your trade value?