When I was doing what passes for research around here for a post a couple days ago, I noted that the Reds’ winning percentage has been getting worse, but that it was still better than the winning percentage of the first place teams of two of the divisions. Factoids like that make it kind of hard to keep perspective, so I got curious to see how the progression of the Reds’ record looked over the course of the season. 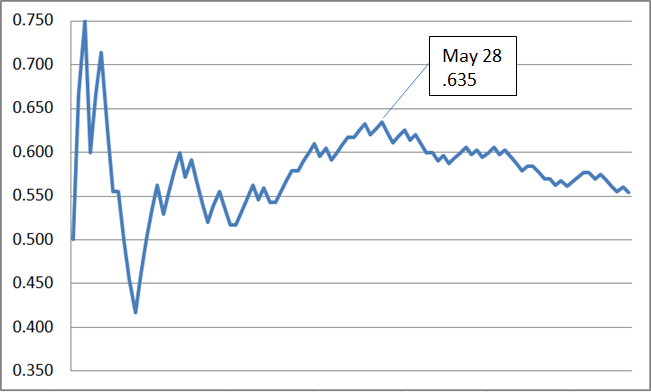 I left the first data point off the graph because the zero threw off the axis. Even the most pessimistic observer will admit that having a .000 winning percentage for the first game of the season isn’t really that relevant anyway.

There’s a definite downward trend since May 28, but it actually wasn’t as dramatic an image as I expected. Lucky for the Reds, it takes a long time to completely undo the kind of good they did through most of May. There may still be hope for this season. Even so, I think we’re all looking forward to a relaxing All-Star Break where the Reds can’t do any more harm than they’ve already done.

Posted in Random Ramblings.
Comments Off on A disturbing trend