Time for Bailey to start a no-hitter streak 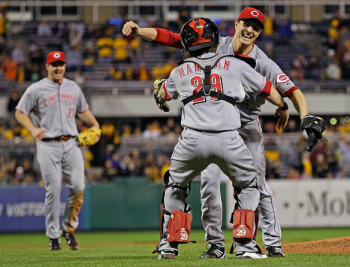 Here’s a picture from the no hitter against the Pirates last September. I picked this one because 1) I’m already tired of seeing the pictures from last Tuesday, and 2) they’re wearing the away colors, like they will be tonight.

When Homer Bailey threw his last no hitter (last Tuesday), the Reds were 7-3 in their last 10. Today, they’re 5-5. It doesn’t sound like much of a jump-start, but maybe it’ll just take a second in a row to really get the team going.

Already, Bailey is the owner of the two most-recent no-hitters in baseball: last Tuesday and September 28 of last year. It got him half of the Player of the Week award (shared with Braves catcher Brian McCann, who got a lot of hits or something). All he has to do is throw another one tonight and he can join the likes of Johnny Vander Meer who was the last one to throw back-to-back no-hitters–only 75 years ago.

Bailey will be taking on the Brewers tonight at 8:10 pm ET at Miller Park. The Brewers are in a sore state: 35-52 and dead last in the NLC. But it’s Kyle Lohse (RHP, 4-6, 3.43 ERA) going for the Brewers, the former Red that they signed when they were overly optimistic about how this season was going to turn out. Lohse is a pretty tough cookie, and if the Reds’ recent performance against Aaron Harang is any indication, facing former teammates doesn’t lead to good offense for the good guys.

As the guys on the radio are so fond of saying, these are the games that the Reds simply need to win. A no-hitter doesn’t guarantee that, I guess, but if the offense can’t get it together then, they never can.

Posted in Random Ramblings.
Comments Off on Time for Bailey to start a no-hitter streak