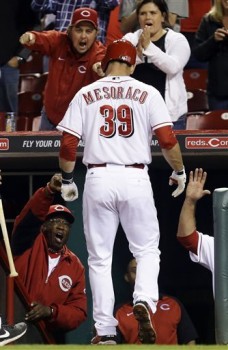 Mesoraco following a game-tying home run in May.

Everybody’s writing about the recent success that Cincinnati Reds catcher Devin Mesoraco has been having this month.

First, Red Reporter talks about how Mesoraco, kind of forgotten, may well become the right-handed impact bat the Reds have sorely needed.

[T]he 2013 Reds lack an offensive player who is outperforming expectations. They’re like a tech company, twelve years after going public, whose stock takes a hit when they meet their revenue numbers for a quarter but decline to raise targets by 8%….In truth, there wasn’t a single player expected to contribute who you could truly point to and say “yeah, he might really blow our expectations out the of the water.”

It’s a good point. Joey Votto, Jay Bruce, and Brandon Phillips aren’t likely to be better than they’ve been the last few years. What they already are is pretty great. We know what they’re going to do. Todd Frazier and Zach Cozart are early enough in their careers that they could surprise, but they’re performing in line with what was predicted at the beginning of the season.

Which leaves Devin Mesoraco, a guy who’s getting his first taste of regular playing time with Ryan Hanigan on the disabled list for an extended period of time.

The #15 overall draft pick in the 2007 draft has caught fire, and it’s likely no coincidence that the most productive month of his career is coinciding with the month where he’s on pace to have his most consistent playing time. He’s currently .354/.396/.552 tear through 53 PA in July, and with 7 games left in the month (and Ryan Hanigan still on the DL), he looks poised to surpass his previous career high of 60 PA in a month despite the fact that the All-Star break took 4 days off the schedule.

Obviously, that’s a small sample size, but it’s encouraging. Mesoraco has never hit this well in the majors. He has a history of taking time to adjust to new levels of competition. Plus, as a catcher, he has more to learn than any other position player.

He went into Thursday’s game against the Los Angeles Dodgers with 12 hits in his last 27 at-bats. Among those hits were three doubles and two home runs. He entered the game hitting .262 with a .327 on-base percentage and .407 slugging percentage. Those numbers are comparable to Brandon Phillips.

Of course, the one potential roadblock to Mesoraco becoming the Reds’ surprise bat of the season is Dusty Baker.

“Hanigan is still going to get in there,” Baker said. “There are certain teams that don’t run when Hanigan’s in there. There are certain guys that throw well to him. I’m fortunate to have a veteran guy and a guy that’s on the way and learning.

“Someday, the job is going to be Meso’s. It’s just not now.”

Not that I expect Baker to anoint Mesoraco after one good month, but the feeling I get from this quote is that it’s almost an impossibility for Mesoraco to become the primary catcher this year, no matter what he does. I know Baker likes to protect his players–in this case Hanigan–but this is one of those times it makes him come across as an inflexible manager in a game that requires constant adjustment.

If Mesoraco continues hitting like he has in July and Hanigan struggles after he’s activated, I am confident the playing time will resolve itself, though.