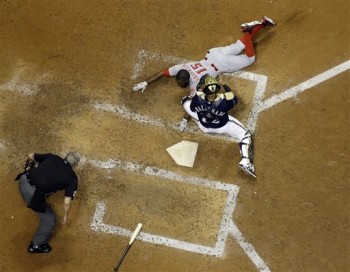 He was safe, actually. I would have made “bad umpiring” into reason number 4, but that’s an epidemic that affects all the teams. (AP Photo/Morry Gash)

Two outs in the top of the sixth inning, Reds down 0-2 to the Brewers: Joey Votto takes the first pitch for a ball and sends the second pitch into center field where it is caught by Carlos Gomez.

“I guess the Reds are losing the series to the Brewers,” I say.
“No, they’re getting swept,” replies my husband.

Now, we won’t know whether the Reds actually get swept by the worst team in the NLC for another seven hours or so, but this conversation is indicative of what it feels like to be a Reds fan right now. It just feels hopeless.

It’s a strange way to feel. The Reds are still 10 games over .500. Their 50-40 record would still give them first place in the NLW and the ALC. They’ve just gotten two infielders elected starters in the All-Star games. And yet.

One reason that Reds fandom feels so bad is that, while the overall team record is still in the positive, that is mostly thanks to an outrageously good month of May. Lately the win-loss record has been heavily tipped toward the loss side. Since June 15 the team has gone just 9-13 (.409).

That kind of record over the whole season would lead to 66 wins. It’s not as bad as the Marlins, but the team we Reds fans have been watching for the last month has been a pretty stark contrast to the 18-8 (.692) team we saw in May.

But I think the biggest reason that it feels like we’re watching a terrible team right now is because we’ve anticipated so much from the beginning. These are the defending division champs, with a highly talented, dedicated, and durable roster players in the prime of their careers. Against all odds, their manager has stopped hating walks and the Cardinals have lost all but one or two of the guys who having standing deals with the devil. This ought to be our year.

And it still could be, I guess, but it’s going to take a change in momentum. Taking one from the Brewers this afternoon wouldn’t be a bad start.

Posted in Random Ramblings.
Comments Off on 3 reasons it feels like the Reds suck