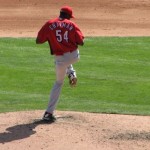 
Chapman will learn to recover from not having his best stuff, or having a stiff back, or getting hit around. It’s all part of the process, and if he learns as [advisor Tony] Fossas believes he will, then Chapman could be a major contributor to the Reds in the second half of the season. Which will be no small matter.


If there is a sleeper team in Arizona, it is Cincinnati. Opposing managers, scouts and players alike think that the Reds can make a run in the National League Central.

The Daily Brief: Will the Reds Get Wood or Take Leake?

Last Game
Aaron Harang had such a bad start that everyone will shrug and say, “It’s only Spring Training.” He allowed 7 runs in 2 2/3 innings in leading the Reds to a defeat at the hands of the Rockies.

Next Game
Mike Leake will start against Seattle today at 4:05pm EDT. He will be followed by Kip Wells and Travis Wood. All remaining Spring Training games are on the radio, so tune in to see if Joey Votto gets a hit.

The Search for a Year of Innuendo-laden Headlines
Remember how much fun it was when the Yankees activated Wang? You’re not the only one. The Reds want a piece of that lucrative snicker-worthy headline business, or at least Reds beat writer John Fay thinks so. He’s checked the calendar and the schedule and is predicting the Reds will choose either Travis Wood or Mike Leake as their 5th starter.

What to Say to Sound Smart at the Water Cooler
Drew Stubbs has a 7-game hitting streak, which includes an inside-the-park home run.

Posted in Cincinnati Reds, Daily Briefs, NL Central, Spring Training.
Comments Off on The Daily Brief: Will the Reds Get Wood or Take Leake? 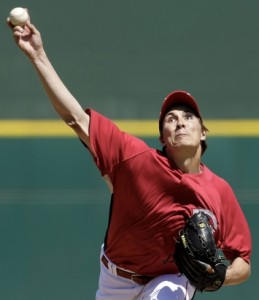