Dusty Baker on the Starting Rotation

Today was the first workout for all of the Cincinnati Reds pitchers and catchers. And as evidence, John Fay has a picture of them stretching.

Fay also had the chance to talk to Reds manager Dusty Baker about the starting rotation. Unlike in years past, there won’t be a huge audition for roles.

Dusty Baker said the Reds will only get “seven or eight” pitchers ready as starters.

“That’s early,” Baker said. “Then you start cutting back once you decide. Health is a big issue here. You hope it doesn’t come into play, but it usually does. The better shape they’re in less chance for injury.”

It sure is nice to have the days of the open casting call for the pitching staff be over. Those seven or eight pitchers Baker mentioned have to be Bronson Arroyo, Edinson Volquez, Johnny Cueto, Homer Bailey, Travis Wood, Mike Leake, Sam LeCure, and Matt Maloney. Any combination of those five is better than what the Reds have sent out for so long. It’s so nice to have the opposite problem for a change.

In addition, Baker also mentioned Dontrelle Willis, who has looked good in early workouts so far. I’m not sure where the Dontrelle Train will lead, but if he could find an unopened bottle or two of that awesome-sauce he had earlier in his career, the Reds pitching glut problem would continue to be a happy problem.

At long last, the day has arrived: the Reds’ pitchers and catchers have arrived at the spring training facility in Goodyear, Arizona. Baseball is upon us! 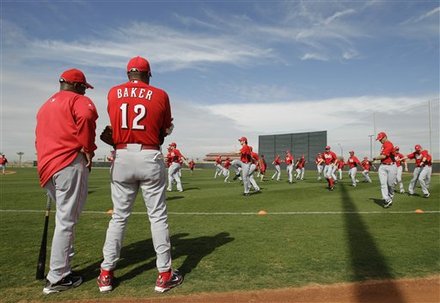 Like you, I wish I were taking my own photos of a view of the pitchers and catchers dancing slightly obscured by Dusty Baker’s backside, but for now we’ll have to be appreciative of the second-hand accounts offered by the Internets. Like this tidbit from John Fay:

Good morning from Goodyear, where it’s a bone-chilling 51 degrees. Sorry, had to do it.

John, it was 57 today in Indianapolis. I drove home from work today with my coat discarded and forgotten in the other seat and the sunroof open. Apologize for a job that has you running around spring training camps instead of stressing out about software releases if you like–I know I certainly resent it–but the groundhog was right and there’s no need to apologize for your 51.

Now let’s get on with some baseball.