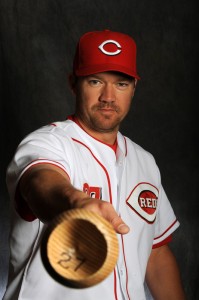 After the Reds lost the first game of the series, I was a little nervous that the Pirates might really sweep the series and come into a tie for first. But now the Buccos will have to hope for another series to do that, since the Reds won last night, 4-5.

Johnny Cueto started for the Reds, and it was Good Cueto this time. He went 7.2 innings with 3 runs (earned) on 6 hits and a walk. He got into a bit of a bind at the end and let two guys on. Logan Ondrusek didn’t make matters better when he came in. He promptly gave up a home run to McCutchen to allow a run of his own (earned) in addition to the inherited 2.

Sean Marshall was better when he took over. He got the next guy out to finish out the eighth with no hits, no runs, no nothin’. Aroldis Chapman closed ‘er down with a 9-pitch ninth inning, including 2 strike-outs.

The scoring was brought to you tonight by Brandon Phillips, Ryan Hannigan, and most of all by Ryan Ludwick. Ludwick went just 1-for-4, but that included 3 RBI. Joey Votto extended his hitting streak, but didn’t do much else. He didn’t have to, for a change.

Last Game
The Reds pulled the series even yesterday by beating the Pirates 4-5. Johnny Cueto got the win and Brandon Phillips redeemed himself a little with a 2-for-4 night that included a home run. He’d gone 0-fer and left 7 on base the day before.

Next Game
Tonight is the rubber match, with Mike Leake (2-5, 4.95 ERA) defending against Kevin Correia (2-5, 4.19 ERA). Don’t let the record fool you: Correia has been a hard-luck loser. His team has won only one of his six quality starts this season.

Through these first 55 games, the Reds have used only five starting pitchers: Johnny Cueto, Mat Latos, Bronson Arroyo, Homer Bailey, and Mike Leake. That’s the longest streak of using only five starters to begin a season since they went 79 games in 1992.

And unless someone gets hurt, it’s probably going to stay this way. These guys aren’t perfect, but the bullpen damn near is, so there’s not really the laser focus on the pitching for a change. More urgent is keeping the Reds’ power flowing.

What to Say to Sound Smart at the Water Cooler
The Reds are 23-6 in games where they hit at least one home run.