One of the hardest things about going to a new ball park is deciding where to sit. Especially for the highly sunburn-able like me, the stupid little diagrams that the MLB sites give you to make your selection utterly fail to provide the really important information.

So I ran across FromThisSeat.com today. You can go here and review the seats in the section you’re sitting in. It’s a nice contribution to the community to be able to warn future visitors about the lack of covering if it rains or let them in on the great view of the Rally Pack while they dance around on the dugout, catapulting t-shirts and hot dogs at the people in the crowd.

It doesn’t look like there are too many reviews of Great American Ball Park sections yet, so if you’ve got a tip to share, consider dropping by. And when you’re headed to a new ball park and can’t decide where to sit, check it out to make sure there isn’t a family of pigeons living in the rafters directly overhead.

Posted in Random Ramblings.
Comments Off on Seat review site gives a voice to the butts there before yours 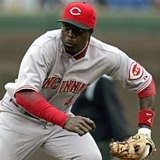 If you’re like me and “working” for yourself from the home office, you’ll be happy to know that FOX Sports Ohio has picked up the June 14 game against the Cleveland Indians at 12:30 p.m.

It’s officially to make up for the rain-out on May 1, but this is even better, since it’s all against the team who gave up on Brandon Phillips and he always brings it when they play.

If you don’t “make your living” from the room over your garage, maybe you could take a late lunch at your local sports pub, call in sick, or claim that two days after Flag Day is a very important holiday for you. Even if you don’t watch the game, you’ve just gotta get away from work at least once in June.

Posted in Random Ramblings.
Comments Off on Televised Day Game on June 14

Last Game
The Reds had an off-day yesterday to recover from their first lost series in the last six.

Next Game
Tonight the Reds visit the Houston Astros. Just two days after facing an “A.J.” in A.J. Burnett for the Pirates, tonight they take on a “J.A.” in J.A. Happ, who’s going for the ‘Stros. Mike Leake will take the mound for the good guys.

Joey Votto: Rock of Consistency
Until Wednesday’s game against the Pirates when Mike Costanzo got a start there, Joey Votto was the only guy who had started at first base for the Reds for the season. No other position had had only one starter. Until then, he was also the only guy who had batted third in the line-up; Jay Bruce filled in on Wednesday.

What to Say to Sound Smart at the Water Cooler
The Reds’ team ERA for the month of May was 3.29.