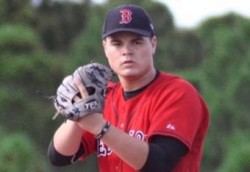 The news is breaking that the Cincinnati Reds have signed their first round draft pick of the 2012 draft, Nick Travieso.

The Florida high school right-hander, who was ranked No. 32 on MLB.com’s Draft Top 100 prior to the Draft, will sign for $2 million. That is below the assigned value for the pick, $2.375 million.

The news comes from the MLB Pro Blog: Big, Bald, and Beautiful. If the information is as reputable as the blog title’s description of the author, then tomorrow, we can expect an official announcement about Travieso’s signing.

Since 75% of major league baseball was taking the night off last night, and since Mondays are dollar menu night at Victory Field, I used the opportunity to support my local Indianapolis Indians. 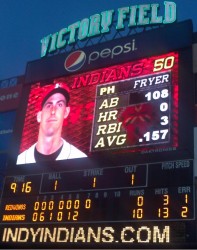 On the offensive side, 12 different guys scored runs. These 8 guys had the RBI:

This was the largest every shutout in Victory Field history, but lest you think it was a fluke, know the Indians had beaten the Red Wings 8-1 on Sunday. Looks like the Pirates either have some good talent on the way, or the Twins have a shallow farm system. In fact, it’s probably both, but watch out for the Pirates in the next few years.

The win brings the Indians’ record to 37-27. They lead the International League West by 7 games. Tonight they go for the sweep; first pitch is at 7:05 p.m. It’s Two-for-Tuesday night: get two tickets for the price of one with a ticket from any area McAlister’s Deli location

Updated at 10:40 a.m. to correct the affiliation of the Red Wings from Washington Nationals to Minnesota Twins. Thanks to our unofficial fact checker, @melmgoodwin.

Last Game
The Reds (and 21 other teams) had an off-day yesterday. For the Reds, it was their third day off in the last two weeks. It’s like watching baseball in France.

Much Ado About Spit
Video footage from Sunday night’s game against the Detroit Tigers provides compelling evidence that the Tiger’s closer, Jose Valverde, was blowing big ol’ nasty blobs of spit into his mitt, presumably for the purpose of throwing spittballs.

Now, it is obvious that the Reds lost this ESPN Sunday Night Baseball game because the bullpen blew a 4-run lead. The bullpen was aided and abetted in its sub-par work by a manager who reverted to his micromanaging ways and a home plate umpire who thought the strike zone started 6 inches above the ground, but ultimately, if the Reds’ bullpen had done its job, the Tigers’ bullpen would have been pitching from behind.

So, no excuses, but shame on you anyway, Valverde. That’s not only cheating, but completely disgusting. How would you like it if I spit on something and then threw it at you? Sicko.

What to Say to Sound Smart at the Water Cooler
Even after Aroldis Chapman’s two bad outings, he still has a 0.87 ERA and has struck out 55 in 31 innings. He may have set everyone’s expectations too high before, but it’s still disconcerting that he got so bad so suddenly. If he has a third bad outing in a row, they need to get that guy an MRI.