With the 14th pick in the first round of the First Year Player Draft, the Reds have selected RHP Nick Travieso. Congratulations, kid. Maybe we’ll see you in 3 or 4 years.

Posted in Cincinnati Reds, Wheeling and Dealing.
Comments Off on Reds select Travieso in MLB draft

As the Cincinnati Reds get more interesting to watch, the bigger channels start flexing their muscles to show Reds games. The June 10th game (this coming Sunday) was originally going to be showing on FOX Sports Ohio, but now it’s slated for national broadcast.

Well, “national” is as “national” does, I suppose. Sometimes when this option is picked up, it seems like fewer people end up seeing the Reds than if it had been left alone.

Still, you’ll be happy to see games like this picked up if:

And that’s because a Reds game picked up on the national scene means a day game that wouldn’t have otherwise been broadcast gets picked up by FSOH to make up for it. This time it’s the August 18th game:

As a make-up, please note that FOX Sports Ohio has picked up the Reds game on Saturday, August 18 at 1pm against the Chicago Cubs. The game will be preceded by Reds Live pregame show at 12:30pm and followed by Reds Live postgame edition.

This game is the first of a day/night double-header at Great American Ball Park, so FOX Sports Ohio will be back on the air that evening with Reds Live at 6:30pm as pregame coverage of the second game at 7pm.

I doubt you’ll remember that come August 18, so mark your calendars now. 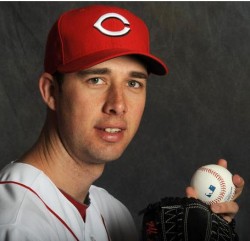 Unfortunately the Reds couldn’t quite put together the sweep of the Astros last night, as they lost the final game of the three-game series, 3-5.

Bronson Arroyo started for the Reds. He allowed 5 runs (earned) on 8 hits and a walk in 6.1 innings. The 2-run home run he gave up to Maxwell in the seventh inning was pivotal, though if I were Arroyo, I might be a touch annoyed that a team who came up with 12 runs the day before couldn’t come up with even half that much when I started.

After Arroyo, Sean Marshall came out for an inning, followed by one of the few guys who didn’t pitch the day before, Logan Ondrusek for .2. Both pitchers allowed zero runs.

On the offensive side, Zack Cozart had 2 of the team’s RBI and Joey Votto had the other. Only Cozart had more than one hit on the night, going 2-for-4 with a run scored. Arroyo helped himself out a little with a hit and a run scored as well.

The loss brings the Reds record to 30-23, in first by 3.0 games. The Reds have an off-day today. They host the second-place Pirates in a three-game series starting tomorrow. First pitch at 7:10 p.m.