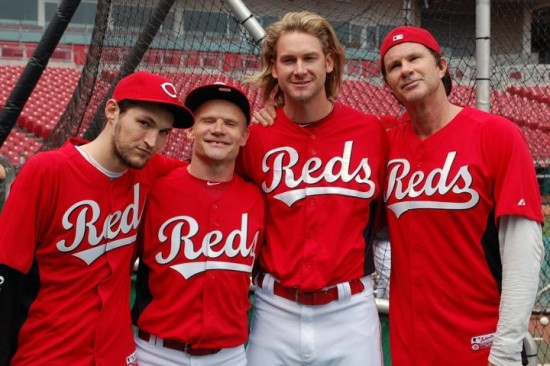 Heir to the ‘Latin Love Machine’ title in LA?

This is one of those posts that’s only going to make sense to long-time RHM readers. You would have had to have been around, like, 5-7 years ago to remember when platoon catcher Javier Valentín was dubbed the “Latin Love Machine” and became sort of a mascot to the site.

Back then we had the whole blogsphere calling him “the LLM”. We posted up a bouncing Javy head every year on his birthday. We even added a site tagline in his honor: “Making Javier Valentín a household name since 2005.”

Those were heady days.

But yesterday, there was promise for the return of the Latin Love Machine dynasty. Javy’s nephew, Jesmuel Valentín was drafted by the L.A. Dodgers with the 51st overall pick. So keep your eye on L.A. the next couple years to see if Jesmuel can achieve household name status.

Posted in Random Ramblings.
Comments Off on Heir to the ‘Latin Love Machine’ title in LA?

Last Game
The Reds were off yesterday. Before that, they closed out a series with the Astros.

Next Game
Today the Reds start a three-game series with the second-place Pirates tonight. If the Pirates sweep the series, they can be tied for first. Yet again the Reds face A.J. Burnett, this time with Homer Bailey on the mound.

What to Say to Sound Smart at the Water Cooler
Homer Bailey was the 7th overall pick in the 2004 draft. He was 18.

Posted in Daily Briefs.
Comments Off on Daily Brief: Pirates challenging for first in NLC

Yesterday was the first day of the First-Year Player Draft. The Reds had the 14th, 49th, and 57th picks yesterday. Now they have until 5 p.m. ET on July 13 to sign these guys.

Right-handed pitcher
Age: 18 HT: 6’2″ WT: 215 lbs
Archbishop McCarthy High School, Southwest Rances FL
Travieso is a bit of a flamethrower and has topped out at 99 MPH.

The draft continues today and Wednesday. The Reds still have the 78th, 109th, and 142nd picks ahead of them.