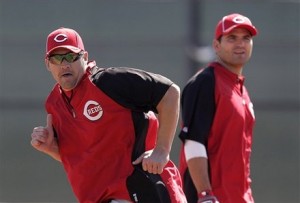 Veteran third baseman Scott Rolen has been penciled in to the line-up tonight for the first time since his stint on the 15-day disabled list that started 37 days ago on May 12. As of now, no corresponding roster moves have been announced, but I’d guess they’ll option Negron.

Rolen’s strained left shoulder is apparently feeling much better: he smacked a 3-run home run last night on rehab assignment with the AAA Louisville Bats. They were playing the Rochester Red Wings, who are truly, truly terrible, but it’s still something to be hopeful about, since Rolen was hitting a big fat .174 when he got hurt.

Rolen’s timing may be great or it may be really crappy. On the one hand, the Reds have been totally killing it lately. They’re on a 6-game winning streak that ties their longest streak of the year. But does that mean that they’re likely to keep it rollin’ with Rolen, or that they’re due for a loss at the hands of the already fired-up Derek Lowe and the Indians?

Posted in Random Ramblings.
Comments Off on Rolen Returns to Reds

When the Reds sent out a Sunday afternoon line-up that featured Wilson Valdez, Miguel Cairo, and Willy Harris, you could tell this was not the same team that’s been doing all the winning lately. That didn’t stop them, though, and the Reds took home the victory, 3-1.

Johnny Cueto took the mound for the Reds, which is always a good sign. He had a little weirdness though. Not only did he walk in the Mets’ only run in the second inning, he also suffered some light-headedness in the top of the third inning after hitting a double to lead off. The trainer got him some meds and he was OK after that. Maybe it was a little lingering flu-like symptoms.

When it was all said and done, he pitched 7.0 innings and allowed 1 run (earned) on 6 hits and a walk. He struck out a record-high 8 batters. Jose Arredondo put in the next .2 innings of work, allowing 0 runs on 1 hit. Sean Marshall got the 1.1 inning save by putting in a hitless performance.

For the offense, Zack Cozart is quietly making himself a Rookie-of-the-Year contender. Yesterday he went 3-for-5 with a run scored. Joey Votto was, of course, even better, going 3-for-4 with a walk. Watching Votto is kind of like watching the space shuttle take off: you know what’s going to happen, but you still can’t tear your eyes away, it seems so unbelievable.

But neither of those guys actually brought in the runs. Yesterday, that job was done by Valdez and Brandon Phillips. Apparently playing center field agrees with Valdez; either that or he’s a super-late bloomer–a sort of offensive sleeper cell. Whatever the case, I’m sure not complaining, since you know Dusty Baker’s personal OCD is that the center-fielder must bat second after the shortstop, no matter how he hits.

Last Game
The Reds got all the back-ups into the line-up but still extended their winning streak to 6 six yesterday by beating the Mets by a score of 3-1. Johnny Cueto walked in the Mets’ 1 run in the second inning, but he also struck out 8. The Reds are now 38-27, putting them 4.0 games in first place in the NLC.

Baker v. Lowe, Part Deux
Lowe, as you’ll recall, went off on Dusty Baker for calling for a pitch inside on him last week when the Indians were visiting Cincinnati.

It was an out-of-proportion response to an inside pitch, even for an AL pitcher, so obviously there was more to the story. However, it’s all very shrouded in mystery as both Lowe and Baker were willing to bash each other to the media, but neither would say exactly why except that it was over something that happened years ago when they were both with California teams.

The strongest hint we got was Baker making a snide comment about Lowe drinking on the job. This isn’t very satisfying, though. Why would the manager of one team give a rat’s ass about a pitcher on another team drinking on the job? Did Lowe hit Baker’s car in the parking lot?

Whatever it was, the feelings are still very close to the surface, and Lowe doesn’t have to hit tonight since they’re playing in an AL park. I hope he doesn’t take anyone’s head off.

What to Say to Sound Smart at the Water Cooler
The Reds 6-game winning streak ties the season high. The Red also won 6-games in a row May 19-24.