Chapman blows another one

Five o’clock p.m. and the Reds have already lost today’s game. Tomorrow it’s back to well-reasoned and -researched posts, but tonight I’ve got nothing better to do while the soup simmers than indulge myself in a little bitching. 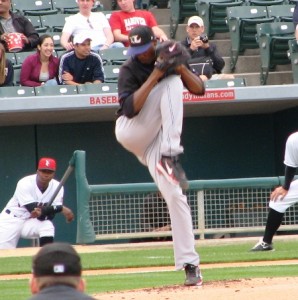 Complaint #1 – What the hell, Chapman?
Aroldis Chapman made his first appearance today since he handed over the walk-off homer to Asdrubal Cabrera of the Indians on Tuesday. And guess what? Chapman blew it again.

Chapman insists that he’s fine physically, though the years have show that pitchers don’t actually know when they’re fine. I suspect there’s a constant level of pain such that a guy can’t necessarily differentiate injury from normal.

Complaint #2 – What the hell, Baker?
Of course, it was Dusty Baker who stupidly put Chapman in for the ninth inning with a one-run lead. What a moron! Even if you don’t think there’s anything wrong with Chapman…that he’s just going through some bad luck right now…you don’t stick him in in that situation.

There’s something in Baker’s psyche that just loves to keep sending failing players out there. It’s possible that he’s got some river of cruelty deep in the oceans of his subconscious, but it’s probably more benevolent than that: a desire to keep giving guys a chance to bounce back. Either way, it ends up being to no one’s advantage.

Complaint #3 – You know why the Reds’ season-high losing streak is only 4?
Johnny Cueto, that’s why. I wish someone else could pull off a win occasionally.

Complaint #4 – Drew Stubbs is about to come back
Well, now that’s not actually much to complain about. In fact, assuming Willy Harris is the one who makes room for Stubbs, the Reds will actually have a decent bench for the first time all year. But with the way I’m feeling this afternoon, my head will explode when Baker puts Stubbs right back in the lead-off spot and he strikes out on 3 pitches. He’s been 0-for-6 in his rehab stint as of this morning.

Complaint #5 – I just hate umpires
I can’t find a single positive about umpires. If they’re perfect, they’re adequate. If they’re less than perfect (and they ALWAYS are) then they make the game about their own authority and infallibility instead of getting the call right. And now that there’s technology available to actually help them do a better job, they’re taking the coward’s path and pushing harder and harder to try to convince the world that no one should ever question their judgement. It disgusts me.

Complaint #6 – “It couldn’t have gone better”
Did the constant fan ridicule drive the orthopedic place to take down the commercial with the lady apparently wandering into strangers’ houses and injecting stories of her busted-hip surgery into their conversations? Because I think that might have been the bad luck charm.

That’s all my bitching for now. I’d like to say I feel better, but I think I’m more worked up now. Time to have a beer, watch some junk t.v., and get ready to have more rational, reasoned complaining tomorrow.

Posted in Random Ramblings.
Comments Off on Chapman blows another one