The Reds got their winning streak up to 1 last night by beating the Brewers in the first game of the series.

Oh, Mat Latos. This was a performance we really, really liked. Let’s stop worrying about proving that it was worthwhile to trade for you and just keep pitching like that, huh? In 9.0 innings of work, Latos allowed 1 run (earned) on 4 hits and 2 walks. He struck out a career-high 13, giving all the fans at GABP free pizza and ice cream. A yummy performance all around.

And if that weren’t enough, Latos brought his bat as well. He went 2-for-3, though no one could seem to bring him in. Drew Stubbs, freshly off the DL, also went 2-for-3, but he also got to score 2 of the Reds’ 3 runs. Joey Votto, though hitless on the night, scored the other run thanks to a walk in the fourth inning.

The RBI belonged to Brandon Phillips (1) and Jay Bruce (2). The Reds didn’t hit any home runs last night, but that’s how the Brewer’s got their one run. Whatever.

Last Game
It was the Mat Latos show in the Reds’ 1-3 win over the Brewers last night. Not only did he go complete game and eliminate the opportunity for anyone to blow his save, the .130 hitter also went 2-for-3 at the plate, posting 2 of the team’s 7 hits.

Stubbs Returns from DL
Drew Stubbs came off the DL for last night’s game, and he was the only guy other than Latos to contribute more than 1 hit. Baker was excited to get him into the line-up because of the spark he adds through his base-stealing. Though he only went 1-for-10 during his rehab assignment (and not getting on often has a negative impact on the running game), he was apparently just saving it up. He was 2-for-3 with a walk, 2 runs scored, and a stolen base.

Stubbs missed 8 games with a strained left oblique muscle before they put him retroactively on the 15-day DL on June 15. The Reds optioned Willy Harris to make room on the roster, which makes sense, since Harris is who they brought up when Stubbs got hurt in the first place.

What to Say to Sound Smart at the Water Cooler
The Cardinals have strung together a 4-game win streak to pull themselves back into a tie for second in the NLC. The Pirates and Cardinals are both 2.0 games back.

Posted in Daily Briefs.
Comments Off on Daily Brief: Latos shows his stuff in complete game 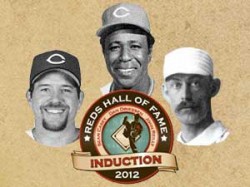