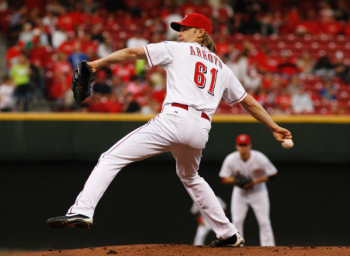 Bronson Arroyo threw 8 innings of 1-run baseball, as well as driving in the team’s lone run.

The Cincinnati Reds had their first chance to win their division last night, thanks to the St. Louis Cardinals choking at the last minute against the Chicago Cubs. Unfortunately, the Reds’ offense was not up to the challenge.

Bronson Arroyo had another nice start, this time going 8 innings and allowing 1 run on 6 hits and no walks. He struck out 4. During that time, the offense managed one meager run, and that was driven in from Arroyo’s bat.

The game stayed tied at 1-run apiece through regulation, and extra innings were forced. Sam LeCure started the top of the 10th, but quickly got into trouble. He hit his first batter. Two sacrifice bunts later–one of which did not result in any outs–LeCure walked the bases loaded.

At this point, substitute manager Chris Speier called on Sean Marshall to attempt to escape the 1-out, bases-loaded jam. Marshall started out well, striking out Andre Ethier. But the next batter, Matt Kemp, singled to right field, driving in 2 and giving the Dodgers the lead.

The Reds managed nothing but a walk in the bottom of the 9th in their failed comeback attempt.

The Reds’ magic number remains one. Assuming the Cardinals don’t collapse against the Cubs again, the Reds will attempt to clinch the division this afternoon at 4:05 pm. Mat Latos goes for Cincinnati, while Stephen Fife goes for the Dodgers.