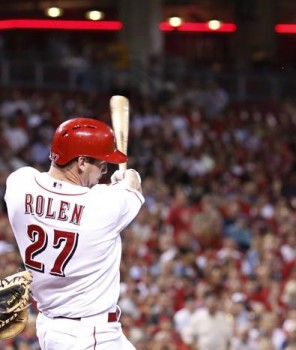 The Pirates scored first in last night’s game, in the top of the first. That was the last time the Pirates would lead in the game, as the Reds tied it up in the bottom of the first, took a commanding lead in the second, and tacked on an insurance run in the eighth.

Mike Leake started for the Reds and he was good. He pitched 7.0 innings, allowing 3 runs (earned) on 9 hits and a walk. Well, actually, he allowed 3 runs on 2 home runs. That’s the risk you run in Great American Ball Park.

Logan Ondrusek got one guy out in the eighth, and then Sean Marshall finished it off. Jonathan Broxton took on the ninth with Aroldis Chapman resting his fatigued shoulder that had him pitching so uncharacteristically badly earlier this week. None of those guys earned a run, as is becoming expected of our bullpen.

It was so much more fun to see the Reds’ offense actually participating in the game for a change. Brandon Phillips not only hit the solo shot in the first to match the Pirates’ score, but he also hit in the team’s second run in the second. He went 2-for-4 on the night with 2 runs scored.

Scott Rolen got the Reds’ other RBI with his solo shot in the eighth inning. The other two runs scored in the second on a wild pitch and a throwing error. MLB isn’t letting me embed this particular video, but you can see the video of the wild pitch and throwing error on MLB.com.

Last Game
The Reds took the second of the three-game series against the Pirates last night. The score was 3-5 and it didn’t have to go to extras this time. It was almost like watching the July team again.

Regarding that last one, Chapman will be riding the pine for the next few days or more. Fine with me. Whatever we can do to get Chapman back in time for the post-season make sense. Besides, we already have 2 other closers.

Brandon Phillips patrols his territory between outs in the first inning.

Phillips and Hughes have no end of respect for each other now
In Monday night’s game, the Pirate’s right hander Jared Hughes hit Brandon Phillips with a pitch. Phillips did the thing no one does and pick up the ball to throw it back. Hughes shouted something at Phillips, and Phillips was visibly agitated. He yelled something that appeared to be a “tell him” message at Andrew McCutchen as they left the field.

Later, Phillips implied in a tweet that Hughes’ comment had been racially charged. It sounds like the word “boy” may have been thrown around, which is just the sort of word that can be seriously offensive to one guy while another guy has no idea that there’s anything wrong with it in any context.

But McCutchen came to the rescue and got the two guys talking to each other before the game yesterday. They apparently hugged it out, because after that, they couldn’t stop telling the media how much respect they had for each other.

Much of this information came from John Fay’s blog, so go check that out for more information.

What to Say to Sound Smart at the Water Cooler
Jay Bruce was named the NL Player of the Week for his performance last week. This is the fifth time he’s been awarded the honor, which ties the Reds’ record for POW honors. One more and he beats Eric Davis. I think that’s pretty likely, seeing as his cold streaks don’t matter when you’re getting a weekly award. Also, he has already won it twice this year.