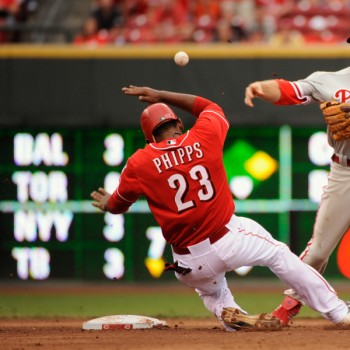 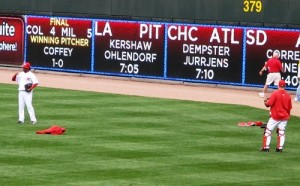 Last Game
The Reds yesterday started a series with the Phillies, and it didn’t go so well. Johnny Cueto was rolling right along, but then suddenly, with 2 outs in the bottom of the fifth, he gave up a couple of singles and then a home run to Jimmy Rollins. Those 3 runs were all the Phillies would need, but they ended up with one more to win 4-2.

Record Perspective
The Reds’ loss yesterday combined with the Cardinals’ win brings their lead in the NLC down to 8.5 games. They’ve played 2 more games than the Nationals and lost both of them, so they no longer have the best record in baseball, either.

It’s hardly the brink of disaster, I suppose, but it’s kind of hard to get excited about taking 2-of-3 from the Astros when you’re used to the team setting the world on fire.

At this rate, he’ll beat that record before Votto returns to the line-up.

Posted in Daily Briefs.
Comments Off on Reds no longer own MLB’s best record