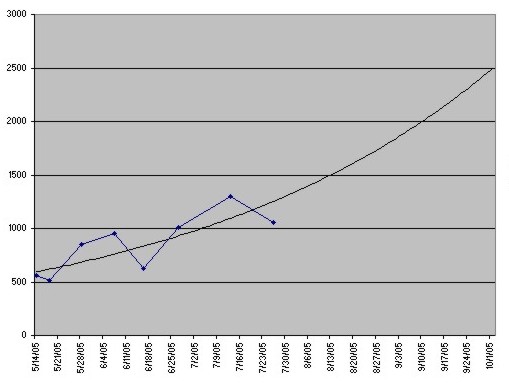 It all starts with the 1-2 of Aaron Harang and the Latin Love Machine, Javier Valentín. Harang (listed at 6' 7″) and Valentín (listed at 5'10″ but realistically more like 5'5″) represent the largest height differential between a pitcher and catcher in baseball history.

OK, I made that up, but I wouldn't be surprised to find out that they're in the top ten. It must be very difficult for an opposing pitcher to switch between such drastically different strike zones when they're next to each other in the line-up. It should have been easier tonight for Pedro Astacio since the two were split by Little Eddie Encarnación (6'1″), but Astacio sure wasn't making it look easy.

The LLM had a big hit in the fifth with a 2-RBI single that brought the Reds' lead to four and followed that up with a solo shot in the ninth to straight away center field. According to Dan Hoard on FSN Ohio, Javy's homer was three feet longer than Adam Dunn's longer shot in yesterday's game. Three feet is approximately the same distance a person could probably toss Javy, if a person were inclined to do such a thing.

Javy wasn't the only one involved in the home run game, though. Sean Casey hit his fifth of the season in the fourth. Yeah, Casey. Didn't see that one coming.

On the scary side of things, Austin Kearns left the game immediately after reaching base on a walk in the fifth with soreness in his hamstring. May he have a speedy return. Ryan Freel came in to pinch run for him and remained in the game, running around like a maniac in right and later in center field. He had probably already gotten kind of dusty while running the bases, but he got himself good and grass-stained by the end of his first play in the outfield. What a pain in the ass it would be to do Pigpen's laundry, huh?

With that win, the Reds not only give themselves their longest winning streak of the season, but also scratched themselves two games out of last place. Tomorrow Eric Milton tries to keep it rolling for the sweep, and I'll post the smack talk that I alluded to yesterday. (It's taking longer than I anticipated to figure out the stats I'll be using, but when it's all said and done, I'll have graphs and everything.)

Before I go to be -- I mean, go out partying with my wild party girl friends, I'd like to give out a few quick kudos:

And a few quick other things:

Great game tonight. I look forward to seeing more tomorrow. If I've recovered from my partying, that is.

Posted in Random Ramblings.
Comments Off on Three Wins. On the Road. In a Row. Wow.

LaRue's two-bomb game
Why do we see him rise up?
Latin Love Machine

Encarnaci&oacute;n
He improves every day
I still miss Randa

Second, short, and third
Aurilia rocks them all
You want to buy him?

Since the All-Star Break
Reds win nine in fourteen tries
What is going on?