It's nice to know that there's still one team in this organization that knows how to put together a late-inning rally. 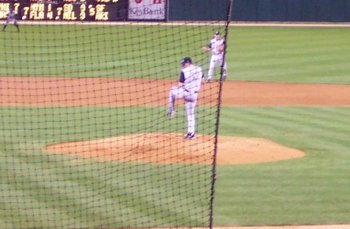 I missed the 7-4 spanking the Reds took at the hands of the Braves last night in favor of watching the Indianapolis Indians squeak by the Louisville Bats 8-7. Justin Germano took the mound for the Bats, and I was very interested to see how the bounty the Reds got in exchange for Randa would fare against this solid Indianapolis team.

Though the Bats got off to the early 0-2 lead in the first inning thanks to RBI hits from Chris Denorfia and Alex Pelaez, Germano let the Indians score in each of the first four innings to lead it 5-2. The Indians appeared to have the game easily in hand, especially when they tacked on two more runs against Joe Valentine in the eighth inning to lead it 7-2. 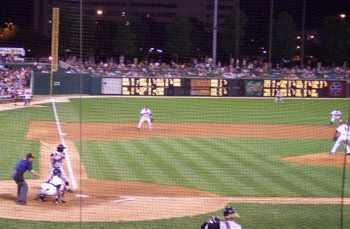 Though the Bats had not scored since the first inning, they came into the top of the ninth looking to make things interesting. Lead-off man Jeff Bannon knocked a grounder that slid just past the third baseman to start things off. William Bergolla grounded out to third, but Pedro Swann immediately hit a home run to right field to score Bannon and himself. Denorfia walked and was then hit in by Eric Crozier's double to right field. Pelaez doubled to left field to bring in Crozier and the score was 7-6 in Indianapolis's favor. Boos poured down like rain.

Indians' pitcher Mark Corey faced his last batter of the evening when he intentionally walked A.J. Zapp, and then it was up to Brian Reith. Reith immediately gave up a center-field single to Miguel Perez, tying the game. Pinch hitter Steve Lomasney popped out to second base, and Bannon struck out in his second at-bat of the inning to end the threat.

Chris Booker came in to pitch the now-necessary bottom of the ninth. Booker's warm-up pitches were hitting 88 mph on the stadium radar, and the pitches he used to walk Cesar Crespo, the first Indians batter, were 93-94 mph. Ray Sadler popped up a horrible bunt that Booker hardly had to move to catch, and had Booker delivered a strike to first, he might have doubled off Crespo. Instead, he gave up a double off the center field wall to J.J. Fumaniak to bring in Crespo and end the game 8-7.

In pursuit of that final double, Denorfia smashed into the wall and did not get up for a while. Several of his teammates and a trainer went out to help him, but he left the field under his own power. He did appear to be limping at first, but was walking normally by the time he was passing the big screen where they were re-playing the video of him hitting the wall and crashing to the ground. Both the Indians' and Bats' game recaps do not mention the incident at all, so I can only assume that Denorfia is OK. I guess I'll find out when I see whether he's in the line-up for tonight's game as the Bats continue their effort to end the Indians' playoff hopes. 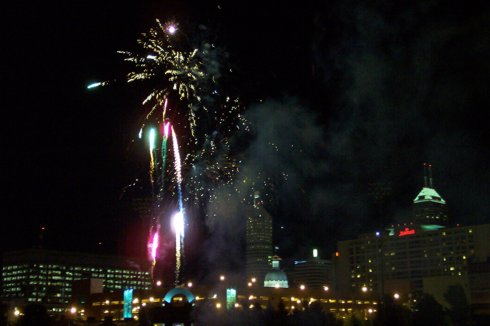 Posted in Game Wrap.
Comments Off on Indianapolis Beats Louisville, 8-7