I Hate That Guy

The first game of the Big Anniversary Trip is in the books, and so far so good.

We checked into the hotel at 3 p.m., and had a little while to wait before the game started at 7:10. Soon we were bored, and decided to head over to the park early. The gates opened as we walked up to them, so we wandered the park, in eager anticipation of the thrill of the game, the energy of the crowd, and mostly the availability of the Raquel Aurilia CD single. 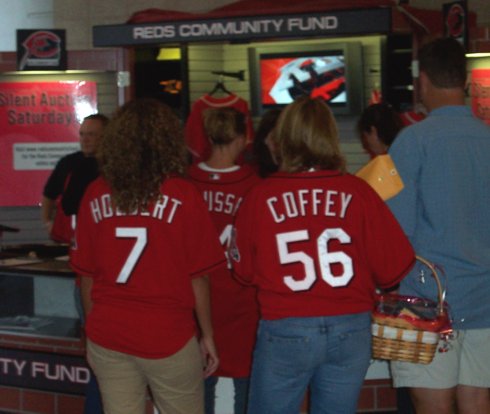 We wandered the park, not exactly sure where to go because we'd neglected to write down the location of where the CD would be sold, and did our best to avoid the guys trying to get us to sign up for credit cards in exchange for towels and t-shirts. We circled the main concourse a few times, and finally, on our third pass of the Reds Community Fund booth, we spied several women donning their husbands' jerseys.

I stood and watched for a while as Raquel herself was passing out the CDs. She was even making change from her own wallet. After I felt like I'd soaked enough in, I got my own copy and got on my way. On our way out to our seats, we got this picture of Gina Cruz standing in line to buy a hot dog. I feel like the freaking paparazzi over here.

Finally we found our seats. We were in the bleachers because it was cheap bleacher seat nights, and we just cannot pass up a great deal. We were in the first row of bleachers, and we were the ONLY people in our row for the longest time, so when Ryan Freel kept looking up at us, I was feeling very conspicuous. I didn't realize until later that we were sitting directly behind the board with the pitch count and speed. Duh.

The seats were uncomfortable, but it was all good since we were being treated to a the utterly unexpected complete game by Ramon Ortiz. But then, about halfway through the game, a guy showed up in the section to our left and felt the need to scream “we need a hit!” for every single Reds hitter, despite the fact that the Reds were up 6-2 by then. Of course, I felt the need to mutter to Jon “I hate that guy” every time he said it, so I was actually probably not the most annoyed person in our row. 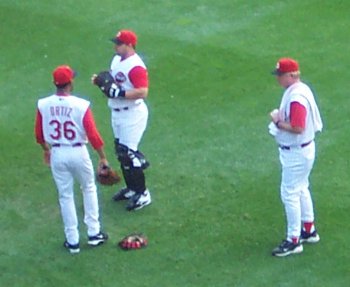 We headed over to the Gameday Sports Cafe after the game to have a beer. There was a bachelorette party going on there, which seems like a strange location to me. Among all the televisions around showing various games there was a screen where they were projecting some slides of their own advertisements. One of the slides showed some random guy with his arm around Freel, with a caption that said “You never know who you'll see at the Gameday Sports Cafe.” Which prompted the question in my mind: what in the hell is Freel doing having his picture taken at a bar? I would think he'd be staying far, far away from any public drinking establishments, at least for the rest of the season.

Tomorrow we'll see Brandon Claussen take the mound. It'd be fantastic to see another complete game. Or at least another win. Or just to avoid the “We need a hit!” guy.

Posted in Game Wrap.
Comments Off on I Hate That Guy