So, the Reds' radio broadcast is going to need a new color guy next season, and there's been lots of talk about it being a former player. Then this story in The Plain Dealer happens to mention that Aaron Boone is honing his skills:

To kill time between his rare at-bats, Boone says he's been working on his play-by-play broadcasting skills during games.

If the Reds don't get him for the broadcast booth, certainly Kriv-dawg will want him for the hot corner. He's already given us too many second basemen, too many catchers, and too many veteran left-handed relievers: I figure too many third baseman is due.

The Future Face of the Reds 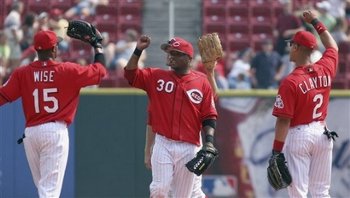 Everybody who will not start next season with Louisville, please step forward. Not so fast, Royce.

Posted in Pretend Captions.
Comments Off on The Future Face of the Reds