Blogger weekend is almost here! If you're among the literally ones of people coming out to the game to meet up with me, JD, Skeeter (yeah, you know her as Ash from a significantly more popular site), Joel and other fun-loving, Internet-savvy Reds fans on Saturday, you might be interested to know about the after-game fun to be had downtown.

My band is playing at a bar called Courtyard Café at Midnight that night (Saturday the 23rd) as part of the awesome MidPoint Music Fest (www.mpmf.com) if you’re interested in coming to see us. Single venue admission is $5 for the festival, or you can get pass for all the venue and check out a bunch of different bands – it’s a pretty cool weekend to come to Cincinnati. The club we’re at is on 1211 Main Street (12 blocks from the ballpark!) and all the bands are up and down main street as well. Maybe we’ll see you there!

Even if you're not coming to the game, you can look for me at the concert. I'll be the one in the Reds' shirt.

If Only He’d Had a Glove on His Foot 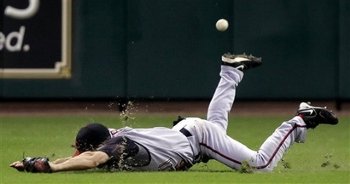 Little did Ryan Freel know when he dove for that ball that the image captured in that moment would be the perfect visual representation of the Reds' play of late.

Sounds a little ridiculous, I realize, seeing as the Reds are up 2-1 as I write this. Of course, having Andy Pettitte out of the game helps. Marc says he's attending to his father in the hospital. He also says that the last-minute pitching change for the Astros caused Reds' manager Jerry Narron to scratch his plan to play Rich Aurilia at first base and Royce Clatyon at short in favor of moving Aurilia to short and Scott Hatteberg to first. So you see, the situation worked out for the best. Except for the father in the hospital part. Hope he's doing OK.

Speaking of sick, my own kid came down sick tonight, very suddenly in the backseat of the car on the way home. He's sleeping upstairs now, where I had been resting with him until just recently, the reason being for why I'm just now catching up on the whole Chris Denorfia hitting a home run thing. Go Dino!

Oh, now Marc's saying that Brandon Phillips was taken to the hospital for precautionary tests after being hit in the eye with a ball that took a bad hop. Yikes. Hope he's doing OK, too.

With all this talk of hospitalization, I'd best go check on my kid. Keep it up, Reds. A win would be a nice change of pace.

Posted in Random Ramblings.
Comments Off on If Only He’d Had a Glove on His Foot