Molina’s ejection and other weekend stuff

Good morning, baseball fans! I’m not generally a morning person, but today the sun is out and I’ve got a whole list of baseball-related topics to talk about. What a great way to start the week. 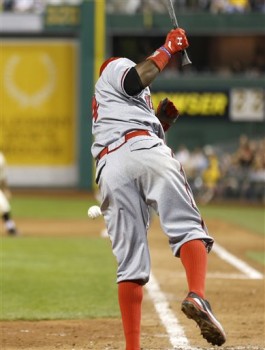 Brandon Phillips is probably in some pain in this picture, but I still admir the high socks. (AP Photo/Keith Srakocic)

Did you see Saturday’s game? I didn’t. Not that I’m bitter.
If you watched Saturday’s game on t.v., you know you had to turn to your local FOX affiliate rather than FSOhio because the national level decided to air the game. Only, in my area, they decided to air the Cubs-Diamondbacks game instead, so the Reds weren’t available on t.v. at all. Jerks.

That part, at least, made some sense though: here in Indianapolis, we’re pretty evenly split among the Reds and Cubs with a few Cardinals fans thrown in. Our baseball team is the AAA affiliate of the Pirates, so there’s a certain interest there as well. However, when the Cubs’ game was delayed and they aired the Yankees-Bosox game instead of switching to the Reds, there was no one happy in Indy.

This particular year I don’t know how happy anyone really would have been to have seen the Cubs game, anyway. The Reds and Pirates are locked in a heated struggle to differentiate themselves in a outrageously difficult-to-top NLC, while the Cubs were 12 games back and taking on the winningest NL team in the west. It was a shellacking.

Saturday’s game was also the one where Brandon Phillips got hit by a pitch in the eighth inning that caused some concern that he might have broken his arm. No break, thank goodness, but he was out of the line-up yesterday. The injury page on Reds.com says he might be back until Friday.

Time to make time to Vote Reds
They start the All-Star voting crazy early in the season, but June 1 is the earliest I’m ready to begin contemplating the season’s halfway point. Saturday was June 1, so here I am, already feeling a little wistful.

If you haven’t already cast your vote, you can go to MLB.com and vote up to 25 times. When I followed this link, it told me that, since I was logged in, I got 10 extra votes. I didn’t log in, so I guess they must still have me logged in from last year.

Damn Cardinals
The last item in this weekend round-up is this photo of Yadier Molina. 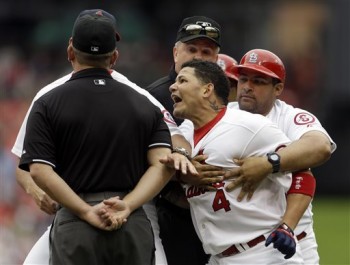 It’s nice that Yadi has his brother at first base coach to make a big show of holding him back. (AP Photo/Jeff Roberson)

He got ejected from the game on Sunday when he threw his helmet after striking out in the third inning. Manager Mike Matheny got himself tossed over the same incident.

Recently, I asked a friend who’s a Cardinals fan whether they could really sustain this pace. It’s frankly unbelievable to me, especially considering the state of the Cards’ starting rotation. Their injury list contains 6 pitchers! He told me that he thought Matheny must have made a deal with the devil, since the team is winning despite poor management.

Well, I’m not sure whether the Cardinals losing a game where Matheny gets kicked out supports that notion or not. On the one hand, if it was his deal with the devil, the fact that he wasn’t in the game might mean that he was too far away to share his tainted good fortune. On the other hand, since his ostensibly poor managing choices weren’t being made, perhaps the Cards should have won anyway.

Myself, I think it’s not Matheny but Molina that made the deal. He even looks kind of possessed in this picture.

Posted in Random Ramblings.
Comments Off on Molina’s ejection and other weekend stuff