Partch is hero in 14-inning game 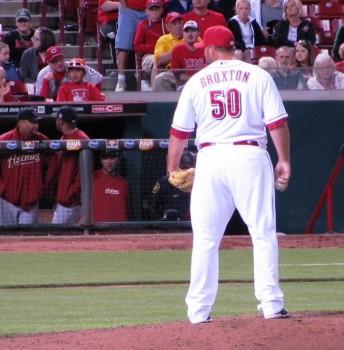 Putting in a picture of Broxton here because I don’t have one of Partch.

Well, the Reds may have been unable to take their thirteenth consecutive win at Wrigley Field today, but how about that Curtis Partch, huh? He wasn’t so much his first time out, but tonight he soaked up four of the fourteen innings in that debacle against the Cubs. Even Mat Latos only pitched six.

And they were four scoreless innings at that. Only 1 hit and 4 strike-outs. Of course, neither team was doing much offensively with those crazy shadows all over the infield, but you can’t knock Partch for that. Dude was called on to keep the Cubbies scoress until the Reds took the lead, and he did as well as could be expected considering that the Reds never took the lead. The guy even batted once.

Which brings up another salient point: Curtis Partch can’t hit. He might want to work on his game at the plate.

Meanwhile, it hindsight it looks pretty weird that the Reds lost in 14 innings and Aroldis Chapman never threw a pitch. Maybe the rule ought to be that Chapman is the second-to-last resort behind Jonathan “I’m apparently not available until the choice is between me and Chapman” Broxton. Alas poor Broxton. Does his apparently injured and velocity-impaired self really deserve the loss?

Oh, and by the way, Sam LeCure was the one to give up the lead the Reds had and force his game into all these extra innings in the first place. He’s got to be hurt at this point, right? The kind of hurt that pitchers don’t know they have because they have a constant level of pain that drowns everything else out anyway?

Oh well, tomorrow is another day, when the Reds will be back home to host the Brewers. For everyone’s sake, I hope at least 1 guy has been put on the DL by then.

Posted in Random Ramblings.
Comments Off on Partch is hero in 14-inning game