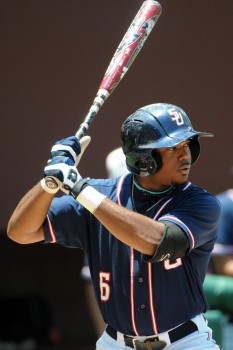 Yesterday, the 2013 edition of Major League Baseball’s amateur player draft began. The Houston Astros, thanks to their terribleness in 2012, had the number one pick and took the player ranked as the best one available, hard-throwing college pitcher Mark Appel. The Cincinnati Reds, for their part, took outfielder Phillip Ervin.

But the draft has problems and oftentimes isn’t fair to both players and teams. For example, since the new collective bargaining agreement, teams have a limit on the total amount of money they can spend on the entire draft. This varies depending on the number of picks the team has and where those picks fall. This leads to situations where a team picks a lower rated player in a higher round to save money for the rest of the draft.

Rany Jazayerli over at Grantland has a fantastic review of the process along with a proposal of how to fix it, starting off with a developer comparison that hits a little close to home.

Let’s conduct a thought experiment. Let’s say you’re a computer whiz. I don’t mean you were able to recover your Word document that one time when your Lenovo crashed — I mean you’re an absolute prodigy in front of a laptop. You taught yourself to code your own website when you were 9 years old. By the time you were 11, you were running a profitable side business consulting on software issues for your parents’ friends. You graduated from high school with straight A’s because you hacked into the system after catching WarGames on late-night TV. ?By the time you finish college, you’ve established a reputation as one of the brightest young minds in the computing industry. Google is interested in hiring you. Bigwigs at Apple have met you on campus for several friendly chats. Facebook follows you constantly — well, they follow everyone constantly, but in your case they’re tracking you with actual human beings. Yahoo sees you as a key piece in their rebuilding strategy. Twitter and LinkedIn have called.

And then, a week after graduation, you get a phone call. Microsoft is on the line — you’re their first-round pick! They’ve made you an offer for a fraction of what your value is worth on the open market. If you don’t agree to their contract, then you can’t work for any other tech company for another year — when some other company will draft you and you’ll go through the same process all over again.

You think Microsoft is terrible at developing programmers and that you won’t learn anything while working there? Tough. You were hoping to settle in Silicon Valley and have no interest in moving to Redmond? Sorry, bub. It was your childhood dream to work for Google? Maybe you’ll get to revisit that dream in 10 years, when you’re finally free to work for whoever you want.

Does this sound ridiculous? Congratulations! You’ve picked up on the inherent absurdity of the sports draft.

The lack of freedom in the system is ridiculous. Athletes have no choice of their employer, hoping to get lucky and end up with an organization that’s good for them. And now with the cap per pick, teams lack the freedom to go after the player they want the most if the amount it would take to sign him is too high.

1. Assign every team a spending cap. (This limits costs, which will please owners.)

2. Allot the spending cap for each team based on where they finished in the standings the year before, allowing the worst teams to spend more in the draft than the best teams. (This helps maintain competitive balance.)

This makes a lot of sense. It gives freedom to both players and teams, while still keeping costs limited, thanks to the overall cap. Plus, I think it would add further intrigue into the whole draft process, watching the bargaining going back and forth so much more actively between players and teams, and sometimes multiple teams. And that doesn’t even get into the discussions on the strategy of using your draft cap on one awesome talent or stocking up your minor leagues on a couple dozen lesser talents.

One thing I was surprised to learn is that this is the system that MLB is currently using for its international drafts. How ironic that the national system has less freedom and capitalism than the international one.

It’s obviously a long shot that MLB would make this change. Hell, they still haven’t fully embraced instant replay. I’d encourage you to read the rest of the articles. It’s got some great ideas on how to improve things.

Posted in Random Ramblings.
Comments Off on Fixing baseball’s draft