What is wrong with the Reds’ bullpen?

Things like the win-loss record and place in the standings do not tell the story of what it’s been like to follow the Cincinnati Reds the last couple weeks. This team always has its ups and downs. When Joey Votto starts slumping, it seems like everyone follows. When Shin-Soo Choo can’t get to one ball in center, it seems like he can’t get to any of them. When it rains it pours.

But that stuff is easy to shrug off as your own expectation bias (anyone else been watching Brain Games lately?), whereas the performance of the bullpen is a different story. Even the success the team has enjoyed so far can’t even drown out the crapitude we’ve been treated to lately.

Ten guys have pitched in relief for the Reds this season. Here’s some information about them. 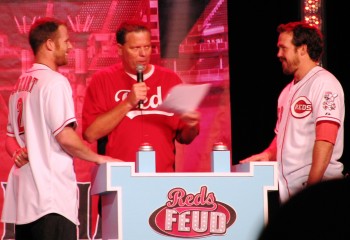 If he can’t shake the pitching doldrums. LeCure can always fall back on his Family Feud skills.

Over the weekend the Reds tried to shake things up a little by sending down Logan Ondrusek and bringing up Curtis Partch. Partch has pitched 0.1 innings and only allowed 1 earned run…to the guy who hit the grand slam full of J.J. Hoover’s inherited runners last night. Alas, the shake up so far has only resulted in making Ondrusek’s the fourth-worst ERA in relief for the Reds rather than the third-worst.

Of course, Partch is the victim of a very small sample size. (And Hoover is a victim of Partch.) Same could be said of the guy above him in the list, Justin Freeman, who isn’t even with the team anymore. The sample size is not as much of a factor for Manny Parra, though. In his case I’m going to have to go with poor management. I mean, lefties hit .235 against him while righties are hitting .500. This guy shouldn’t have 10.2 innings’ worth of outs in only 12 games; it ought to take 25 games for him to get to 10.2 innings. Dude needs to face one batter and take a bow.

Simplistically, if you say that a reliever needs have <3.5 ERA to be good, we’ve only got 4 of those guys. But even among those:

So, what’s the moral of this story? I haven’t been able to pin down a single thing that’s wrong with everyone: injuries, tiredness, poor management, lack of experience, lack of talent…it seems like it’s a little of everything. I guess even in the bullpen, when it rains it pours.