Cueto is back on the DL, and I don’t know where the Reds are 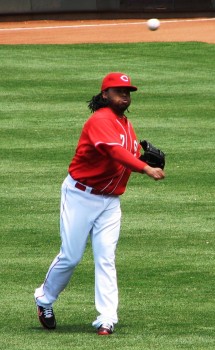 As you probably noticed by the fact that he didn’t start yesterday’s game, Johnny Cueto is on the DL again. At least it’s not his oblique muscle again: this time he’s got a strained right shoulder.

He’s on the 15-day DL retroactive to his last start and they’re saying he’ll only miss a start or two (he’s already missed one, so they must mean another start or two). The Reds grabbed the guy who was going to be starting for the Bats, right-hander Pedro Villarreal, to start in Cueto’s place. Sucks to be the Bats, I guess.

Actually, sucks to be Villarreal. He wasn’t exactly up to the challenge last night. His 6 runs (earned) on 10 hits and 2 walks over 3.2 innings earned him the loss.

Not that he was the only one who stunk up the place. The bullpen combined to give up just as many runs. And the offense didn’t push enough across the place to win even if Villarreal’s innings had been the only ones that counted.

That’s 2 losses in a row now and 3 losses in the last 4 games. The team is still boasting a .600 record, second place in the NLC and third place in the NL, but this week’s losses have been dispiriting affairs. Over the last 7 days, Manny Parra has appeared in 3 games and has a 11.57 ERA, Joey Votto has an OBP of .200, and we lost Brandon Phillips to a HBP.

Good thing today is an off-day. I bet just about everyone could use it.

Posted in Random Ramblings.
Comments Off on Cueto is back on the DL, and I don’t know where the Reds are