We were sitting in the last row of section 4 today, which was apparently a great spot to notice people walking by in the walkway.

I called C. Trent over when he walked by just before the National Anthem. We chatted for a moment before he headed off for the press box. You'll be glad to know that he really is better looking than the photo on his blog. Significantly less Igor-like.

Hal McCoy also walked by later, but I didn't stop him to chat. He doesn't have a blog, after all.

Rob Butcher came by, and I couldn't pass up the opportunity to flag him down. Butcher's a character that I've always found sort of intimidating, but the Reds legitimate media always have such nice things to say about him that I thought it was time to introduce myself.

I wasn't asking for a press pass, but I mentioned that I'd heard that other bloggers had, to which his response was “never going to happen.” When I asked why, he said they were too hard to control.

So, you legitimate media types ought to be happy to know that you're apparently easy to control.

I said “hi” to Bob Castellini when he walked by. The woman with him actually seemed to recognize me, and I've seen her in the stands, which makes me think that she has an excellent memory for faces. How nice.

Though it was a crummy game, the evening of celebrity sightings was topped off when Javy Valentín waved to me when I called out to him after the game. Short of a win, what more could you ask for?

This week on the podcast, the Crack Technical Staff and I broadcast from our vacation condo in Sarasota, Florida, the home base of our wacky spring training adventures. We talk about the rotations, the line-up, our favorite away park, Red Hot Mama’s mention in Sports Illustrated (don’t forget to vote! For RHM, of course!), and the fancy schmancy car owned by someone affiliated with MLB that we saw at the Cody Roadhouse in Bradenton last night.Episode 51: Live! from Sarasota! (27.2 MB, 39:41)

Posted in Cincinnati Reds, Podcasts.
Comments Off on Episode 51: Live! from Sarasota! 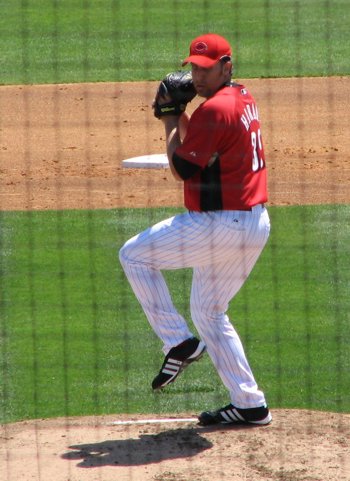 It was Aaron Harang and the Reds over the Pirates in Sarasota yesterday afternoon.

Harang did not have an excellent outing, giving up three earned runs on 10 hits in five innings. Harang has hardly had an outstanding spring, but it's really nothing to worry about. 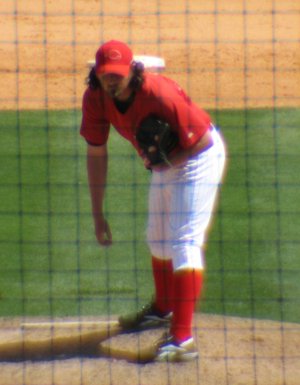 Not only does he appear to be limiting the pitches he's showing the opposition, but there are also the last two years of goodness to take into consideration. And now that Harang's been declared the Opening Day starter for the second year in a row, maybe this low-key pre-season will set him up not to get thrashed by the Cubs again.

Also getting chances on the mound were Victor Santos, Gary Majewski, and Jared Burton. Santos followed Harang with two scoreless innings on one hit. Majewski also had a good, hitless inning. Burton gave up one run on two hits in the ninth. 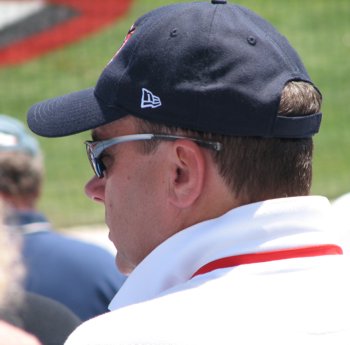 Section 113 is the place to be if you want to hang with the general manager. Both times I've seen Wayne Krivsky at Ed Smith Stadium, he's been sitting right here. This photo looks strikingly like the photo we took last year. 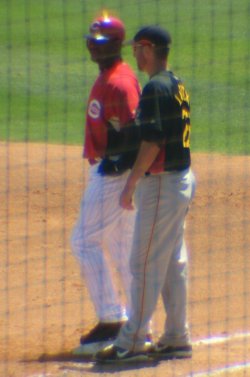 Section 113 is also the section right in front of the press box, where you can get intermittent Internet connection on your PDA if you sit up in the last row, which we did. Speaking of the press box, I said “hi” to John Fay in the concourse before the game, but neglected to explain who I was, so he just waved blankly, clearly not knowing whom he was waving at.

We finally got a good look at this Adam LaRoche, the guy that Pirates fans seem to think is going to single-handedly pull them out of the cellar. Nevermind that he's Craig Wilson junior. LaRoche went 0-3 on the afternoon, but he makes some mean conversation at first base. 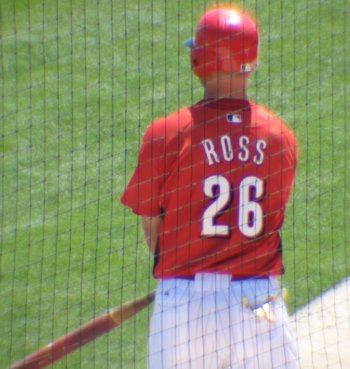 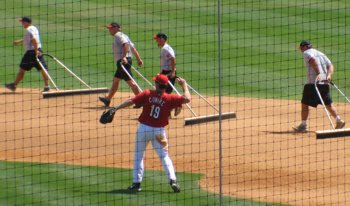 On the Reds' side, Adam Dunn and Edwin Encarnación hit back-to-back solo shots to lead off the sixth inning, and you get the feeling that we could be seeing a bit of that in the middle of this line-up. Dunn was hitting third in this game, but he's been hitting second in most of them.

Ken Griffey, Jr. and Dewayne Wise had an RBI apiece, and Chad Moeller his a two-RBI double in the seventh to give the Reds the lead for good.

The win brought the Reds' spring training record to 17-9. Tonight they host the Twins in Sarasota at 7:05 pm. 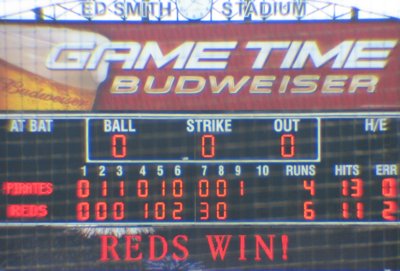