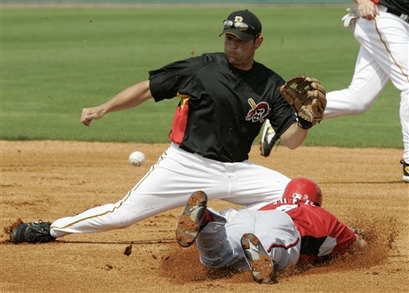 In an earlier diary (“Good Enough To Dream”), I wrote the following hopefully self-fulfilling prophecy: “…or maybe they get Dustin Hermanson and he has a year like he did with Chicago in 2005.”

Well, the first part happened today. According to the official release on the club website, which also quotes his glowing stats from his 2005 season with the White Sox, the Reds signed Hermanson, who's 34, to a one-year minor league contract, along with the obligatory invitation to help himself to the various amenities in Sarasota for spring training. He apparently was scheduled to take his physical in Cinci today, and is expected to report in Sarasota tomorrow.

I think it's a good deal. This is a guy who was arguably among the game's best closers as recently as 2005 (the last time he was healthy), and has pitched in the NLCS twice and in the World Series. If he makes the 25-man roster, he'll make $500,000 according to Trent's blog. If not, there will be one more arm for Rick Sweet to wave in from the bullpen in Louisville.

And if he returns to his 2005 form with the White Sox, the Reds will become the most recent team to pull their closer off of baseball's scrap heap, surpassing last year's Marlins (Joe Borowski) and Mariners (J.J. Putz), Kriv-Dawg will look like a genius, and all it will cost them is half a million recycled lithographs of George Washington.

TO make up for that embarrassing Eric Milton Diary post, I have decided to begin a new Spring Training tradition here at Red Hot Mama. FOr those of you unfortunate souls who do not have MLB radio, I will serve as your ears and provide you with game highlights as they happen right here in the Diaries section.

So check in often and I'll keep you up-ro-date on what's happening.

According to C. Trent Rosecrans this is our lineup:

which is interesting because one of our insiders who saw the posted lineup provided us with the same lineup except he had Jeff Conine at 1B. So we have to assume a switch was made inserting Bellhorn instead of Conine. is the old man feeling rusty after striking out to Homer Bailey yesterday? Maybe, maybe. We'll try to find out for you.

Also, I listened to marty's final Hot Stove Report yesterday and to say he is high on Homer Bailey would be an understatement. He said the Reds would be “asses” not to include Bailey on the big league roster if he has a lights out Spring. he says he is mature beyond his years and is showing command with his offspeed pitches, which was the question mark. He is convinced if the Reds had had the guts to call him up last September the Reds would have made a legitimate run at the playoffs. He lobbied hard for him to be the #5 starter out of the gate.

he then later said Paul Wilson looked exceptional and fully recovered and said he belongs in the rotation too. So who does marty want out of the rotation. He didn't say, but I am guessing Eric Milton is his least favorite Reds pitcher. Maybe we'll get more on that from today's radio cast. And, this is Marty's first broadcast with his son Thom Brennaman, and also jeff Brantley will be making his debut as well.