In the comments on this story linked on Fark.com appears the Crack Technical Staff's amazing imagining of Aaron Harang as a goth. No attribution, but still an honor. The story's interesting too:

Since '56, every NL pitcher who led in strikeouts and wins won the Cy Young award. Until last year, the Siberian Flamethrower missed by one vote. One vote shy of even getting a vote.

Michael Radano of the Courier Post Online must have used Monday's meeting between the Reds and Phillies as an opportunity to chat up Rheal Cormier about his Philadelphia memories:

In his 5 1/2 seasons with the Phillies, Rheal Cormier has come to understand the city and its people. Admittedly, some players don't miss their time along the Delaware River, but Cormier isn't one of them.”When you play 5 1/2 years, you get accustomed to the fans, and when you perform, they'll cheer, and when you don't, they'll boo. I had both,” Cormier said.

My favorite part of the story is when Radano points out that Cormier is only the second-oldest Red:

Cormier, who is a member of a veteran bullpen … is the second oldest Red after another former Phillie in Jeff Conine.

There isn't much smart alecky to say about the story; Cormier comes off sounding very mature and reasonable. I wonder how Bronson Arroyo would respond if his team had told him point blank that they had “no intention of bringing [him] back.”

Posted in Random Ramblings.
Comments Off on Cormier Never Wanted to Leave the Brotherly Love

The Unstoppable Redlegs vs. Pure Evil 3/7

Courtesy of The Consigliere:

The Trick is Missing the Ground 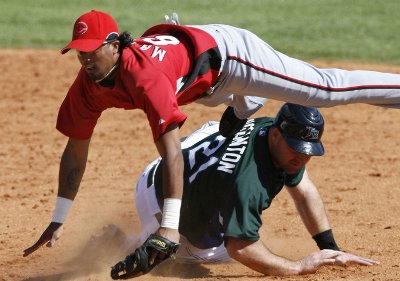