Major League Baseball held a coin toss today to determine the site of a potential National League Central tie-breaking game. In the event of a tie between the Pittsburgh Pirates and the Chicago Cubs for last place, a one-game playoff would be held at Chicago's Wrigley Field on Tuesday, October 3. The loser of the game would be the winner of the distinction of being the worst team in the NLC.

The Cubs and Pirates are currently tied with a record of 65-95, and with only two games left, have already missed the opportunity to end the season with 100 losses.

“Losing a lot of games is great if you can do something with those losses,” Cubs manager Dusty Baker said. “Clogging up the bottom of the division isn't that great to me. The problem we have to address more than anything is falling short of our 100 loss goal.”

The Cubs face the Colorado Rockies in the final two games of the season, who are also vying for last place in the National League West, where they hold a one-game lead on the Arizona Diamondbacks and a one and a half game lead on the San Fransisco Giants. The Pirates face the Cincinnati Reds, who have already been mathematically eliminated from achieving last place.

“Clearly we've got the advantage going into these last two games, but you can't underestimate the Cubs' ability to lose,” said Pirates' general manager Dave Littlefield. “We've got a solid core of veterans past their prime to block our young talent, so I think we have a chance.”

WGN would provide live national coverage of the tie-breaker game because they'll follow the Cubs, no matter how much they suck. You can also bet that a bunch of Chicagoans would travel to Pittsburgh for the game, probably wearing matching shirts.

Honestly, why are we screwing around tying up Juan Castro for two years while Rich Aurilia play the role of “The Offense” for the last month?

UPDATE 9:11 pm: Not that Castro's doing so bad himself. That triple followed by scoring on a wild pitch was pretty good. 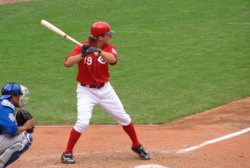 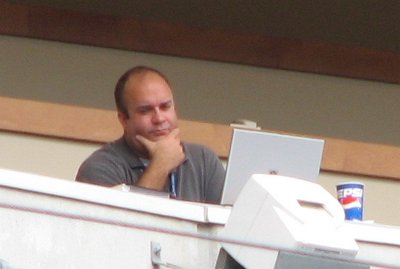 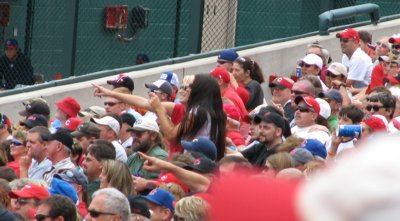 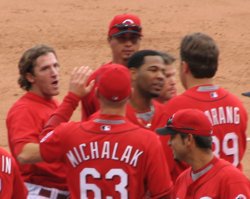 It's been one of those crazy days where I've hardly had a moment between activities, and now I'm exhausted without so much as a single post for the day (though I guess, technically, the podcast was from today). I have a bunch of photos and a description of the Day After Blogger Day, so there's that to look forward to, assuming I can find the energy to put them together after Special Olympics volleyball tomorrow.

I did make an appearance on The Big League Baseball Report today, so you can check that out if you just can't go a solid day without the sound of my voice. Joel gets mentioned again, though I don't call him a woman this time.

Now I'm going to bed. Well, maybe after I see whether Snax can hold the deficit for the Cards.

UPDATE 11:13 pm: That's the ballgame and the Reds are now just 2 1/2 games back of the Cardinals. The Astros are just 1 1/2. It's nice to see the Cardinals change things up and choke BEFORE the postseason for a change.

This week I made the Crack Technical Staff, who is still shaking off the bug he had this weekend, get back out of bed to record and edit the podcast. That&apos;s dedication, baby.

We ramble on about: