This week on the podcast, the Crack Technical Staff and I are pleased to welcome Lambo and Sketkar of the Astrocast to the program to share their insights on the Astros and how they think the season is going to play out.It’s the first time we’ve had two guests on the show at the same time, and I think it worked out well, thanks in large part to me shutting up for a change and letting the guests do most of the talking. The Crack Technical Staff feels very bad that he forgot to unplug the laptop, which is the cause of the hum and some of the other weird noises you hear throughout the program, but I think he’s probably being too hard on himself.

Hopefully you’ll still be able to make out their voices, despite us not having the greatest connection in the world, because this is the first preview of another NLC team we’ve done where the guest isn’t totally down on the Reds. It’s nice to have someone recognize.

Lay Your Hands On Me 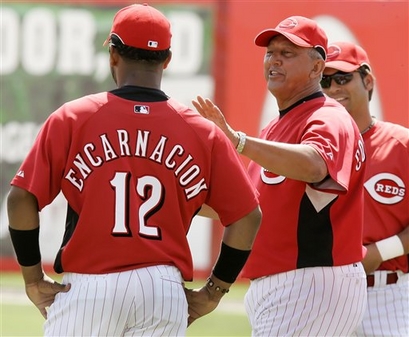 Dave Concepcion uses osmosis to bestow some of his defensive prowess to Edwin Encarnación.

He forgot to mention the starting pitchers, DOH!
Its Matt Belisle for the Reds and Gustavo Chacin for the Blue Birds.