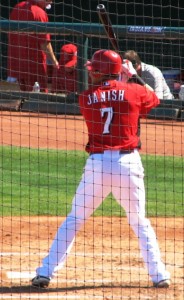 The Cincinnati Reds primary shortstop from 2011 Paul Janish, often referred to as “Soft J” around the RHM household, has broken his left wrist while playing for the Louisville Bats.

Janish was hitting very well with the AAA affiliate of the Reds, with a batting average of .315 and an on-base percentage of .390. He’s expected to miss 4 to 6 weeks.

Of course, the worst part of this is what will happen to him when he comes back. It’ll take a year before he recovers his power.

The Daily Brief: Hosting the Cubs

Last Game
The Reds had yesterday off to finish the month of April at 11-11. Despite this lackluster start, the Reds are second in the division, 3 games behind the Cardinals.

Next Game
The Chicago Cubs come to town tonight for a 7:10 p.m. start at Great American Ball Park. The Cubs’ Jeff Samardzija is working on long rest, apparently a precaution after he’s been building up some high pitch counts. The wily Bronson Arroyo goes for the Reds.

The Road to Cairo
Miguel Cairo is eligible to come off of the disabled list now, but he hasn’t heard that’s going to happen. “I feel good, but I think I have to run the bases first,” is how he put it.

Cairo’s trip to the DL made room for Todd Frazier to join the team a couple weeks ago. Frazier has hit .385 with two walks in his 15 plate appearances since he came up on April 17. Compare that to Cairo’s .111 and one walk in 10 plate appearances before the injury.

What to Say to Sound Smart at the Water Cooler
So far this season the Reds have spent 3 days above .500, 4 days at .500, and 17 days below .500. This has still been good enough to spend more time in second place than any other position.