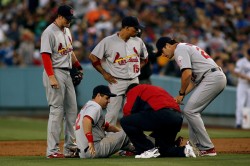 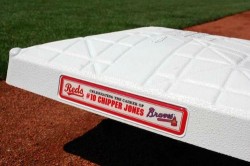 The Reds strolled to a game- and series-victory yesterday, beating the Yankees 5-2.

Sean Marshall came in to be the lefty specialist, which is way insulting for his level of skill. I know he hasn’t been awesome his last couple times out in the closer role, but .1 innings? That’s a non-Dusty-like level of humiliation. To Marshall’s credit, he struck that one guy out.

Logan Ondrusek took over for the other .2 in the eighth and put up a line of all zeroes in preparation to hand the ball over to Aroldis Chapman, the apparent new closer.

Now we all love Aroldis Chapman, but his qualifications don’t exactly match up with his new role. Yeah, he strikes guys out, but he needs rest between outings. Now he’s going to get inconsistent work and only come in when the team has a lead? That’s our manager: always doing the wrong thing. It worked out OK this time, though, as Chapman put in a hitless ninth to close out the game.

On the offensive side, Ryan Ludwick took to his role as DH nicely and knocked in 3 of the Reds’ 5 runs with two solo shots and a double. Ryan Hanigan and Brandon Phillips brought in the other 2 runs.

Tonight the Reds return home to host the Atlanta Braves. Mike Leake (6.21) takes on what must be one of the few starters to have a higher ERA than him at this point in the season, Mike Minor (7.09). With two highly capable offenses behind them, this ought to be a slugfest. First pitch at 7:10 p.m. ET. First home run at 7:25 p.m. ET.

Last Game
Reds win! Reds win! They took the last game 5-2 to win the series against the Yankees.

Knocking on the Door
Though the Reds have only gone 5-5 over their last 10 games, the Cardinals have fallen to earth, putting in a 2-8 performance in their last 10. This puts the Reds a scant 0.5 games out of first place. If the Reds were playing even close to the full potential we all know they have, they’d be leading this one by 7, like the Dodgers are in the NLW.

In third place: the Pirates, 3 games back at 19-22. I love to see the Buccos on the top half of the standings.

What to Say to Sound Smart at the Water Cooler
Aroldis Chapman got his first save of the season last night. Since he’s apparently the team’s closer now, it shouldn’t take long for him to get the other seven he needs to become the team’s save leader.