Got this announcement in the ol’ inbox today. I changed all the “girls” to “women.” I’m sure it violates the brand image they’re trying to create, but it’s my blog and I’ll fail to refer to adult females like children if I want to. 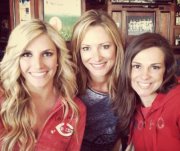 Beginning Monday, May 7, Reds fans can “like” the FOX Sports Ohio Women on Facebook at www.facebook.com/foxsportsohiogirls and enter the sweepstakes at the “Lunch Bunch” tab for the chance to win.

The Lunch Bunch Sweepstakes runs through Wednesday, May 23. The official rules are located on FOXSportsOhio.com.

Lunch for two with Stubbs, Jim Day, Hallie, Kristine, and Sara? I’m sure the FSO Women don’t eat much, but lunch for two doesn’t seem like it’s going to go very far in that crowd.

Last Game
Despite what it looked like for the first eight innings, the Reds actually pulled out a win against the Cubs yesterday 3-4. Since the first game of the series was cancelled due to rain, the win gave the Reds a split in what turned out to be a two-game series.

Next Game
The Reds head to Pittsburgh to visit lovely PNC park and take on the Pirates this evening at 7:05 p.m. Johnny Cueto seems like overkill against a Pirates team that just gave up 25 runs in its series with the Cardinals, but given the disappearing act the Reds’ offense likes to pull, that may not be the case at all. After all, the Pirates also scored 16 in that three-game series.

The Offensive Threat in Louisville
Paul Janish, long derided for being merely an excellent defensive shortstop and not a threat at the plate (Reds fans were spoiled by Larkin), is leading the AAA Louisville Bats in AVG. He’s hitting .315, while the second-place guy is only hitting .255.

What to Say to Sound Smart at the Water Cooler
The Reds Hall of Fame is inducting the late John Reilly this year. Reilly sported a .918 OPS in 1884, plus a real nice mustache.

Posted in Daily Briefs.
Comments Off on The Daily Brief: Reds head to Pittsburgh 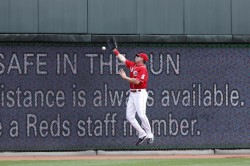