Cairo off DL; Harris on the outs

UPDATE: Looks like it’s confirmed now: Harris has been outrighted to AAA Louisville. We’ll see if he accepts the assignment, but I doubt there’s a lot of other options for him right now. A little time with the minors might be a good chance for him to find his swing. 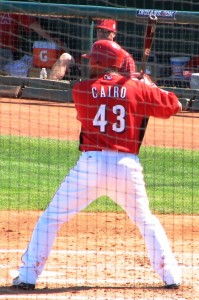 John Fay is reporting an officially unconfirmed but seemingly likely scenario: that Miguel Cairo has come off the DL and that Willie Harris got the short end of the making-room-on-the-roster stick:

Willie Harris was walking out of Miller Park as I walked in a little bit ago. I asked him if something had happened. He shook his head yes. He was talking on the phone. The Reds haven’t announced anything, but it likely means Miguel Cairo has been activated from the disabled list and will take Harris’ roster spot.

If this is the case, it’s surprising to me, in that it is likely the same move I would have made. I expected Todd Frazier to be the odd man out, as he has been before.

Dusty Baker did give Harris a chance to prove himself. Harris had 35 ABs in 19 games, making appearances as a surprising choice for pinch hitter, given his .086 average and .135 OBP.

Posted in Random Ramblings.
Comments Off on Cairo off DL; Harris on the outs

The Daily Brief: Latos’ curse of April is no more

Last Game
The Reds took the rubber game in the series with the Pirates to the tun of 5-0. Mat Latos was starting, so it’s little wonder he put in a shut-out performance. I mean, everyone’s been saying he sucks in April, and the calendar page has flipped. The curse is lifted for another year.

Did you know…?
The first practical typewriters was designed in Milwaukee in 1867, just 103 years before the Brewers played their first game.

What to Say to Sound Smart at the Water Cooler
The Reds are now 5-0 this season in games played on Sunday.

Posted in Daily Briefs.
Comments Off on The Daily Brief: Latos’ curse of April is no more