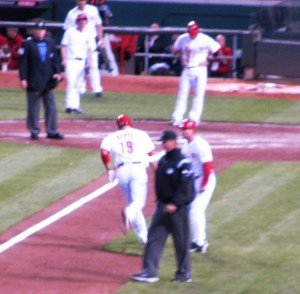 The Reds continued their role as NLE spoiler tonight by knocking the Braves back into second place behind the Nationals by winning 3-1.

It was Homer Bailey on the mound to start things off against a formidable Braves’ offense. He worked 6.2 innings, allowing 1 run (earned) on 6 hits and 2 walks. Logan Ondrusek and Aroldis Chapman then came on to put in .2 inning apiece, with Ondrusek being the lucky one to be on the mound when the win came. Sean Marshall closed it out for the save.

Though everyone was still talking about Joey Votto’s three-homer game, walk-off grand slam, and bat going into the Hall of Fame, it was the right-handers who knocked in the runs for a change. Brandon Phillips and Chris Heisey had an RBI apiece. In fact, Heisey went 3-for-3. Not bad.

Tomorrow the Reds and Braves finish out the two-game series. With Johnny Cueto (4-0, 1.12 ERA) taking the mound against Tim Hudson (1-1, 4.50 ERA), the chances for a sweep seem better than they have all season.

Last Game
The Reds salvaged a single game from the series with the Nationals by winning yesterday in walk-off fashion. Since it was a grand slam that put it away, the final score of 6-9 makes it sound like the Reds looked a whole lot better than they really did. Even so, it couldn’t have been a bit more exciting than it was.

Next Game
The Reds (17-16) go to visit the NLE-leading Atlanta Braves (23-13). Didn’t they just face the NLE-leading team? Why, yes they did, but yesterday’s win knocked the Nats a half game behind the Braves, who just swept the Cardinals in a 3-game series. Atlanta scored 23 runs in that series, but at least they allowed 13, so I’m sure the Reds’ notoriously potential-fulfilling offense will get a run or two before it’s over.

A Smarter Guy Would Have Intentionally Blown the Save
The National League has a healthy respect for Joey Votto, as evidenced by his league-leading 31 walks. When Votto came up in the bottom of the ninth, the team was down by one with two outs and the bases loaded, setting up the most dramatic situation possible:

At the time, the Nationals thought they were doing the right thing to pitch to the man, but in retrospect, they should have walked him–take your chances with Phillips, go into extras, and shut it down before Votto comes up again.

I predict that at some point this season, a team will make this very decision: blow the save with a walk rather than give the Most Dangerous Player anything to hit with the game on the line. Hopefully Bruce is batting clean-up by then.